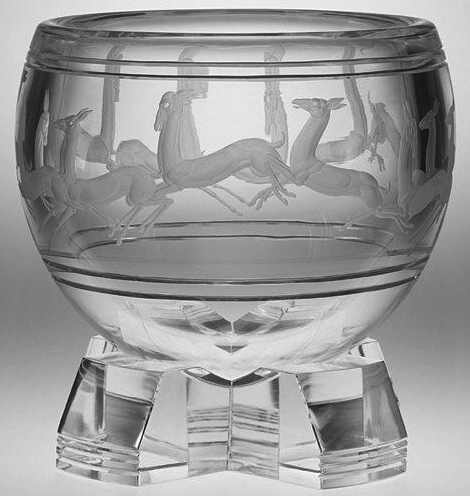 Today the Steuben glass factory in Corning, New York, closed its doors (see local news report below). Although the name was sold for an undisclosed sum to Corning Incorporated, which once owned Steuben, it’s unclear if crystal objects such as the Gazelle Bowl (the 1935 example above is from the collection of the Metropolitan Museum of Art) will ever be produced again.

When Steuben opened in 1903, its biggest competitor was Tiffany, which introduced its iridescent Favrile line in 1894. Steuben co-founder and chief designer, Frederick Carder, countered with Aurene (the example, below, from the Corning Museum of Glass is from the 1920s), whose shapes were more classical than Tiffany’s and whose surfaces borrowed liberally from effects pioneered by 19th-century Bohemian glass artists. The Carder era at Steuben lasted until the early 1930s, when sculptor Sidney Biehler Waugh was named Steuben’s chief designer. 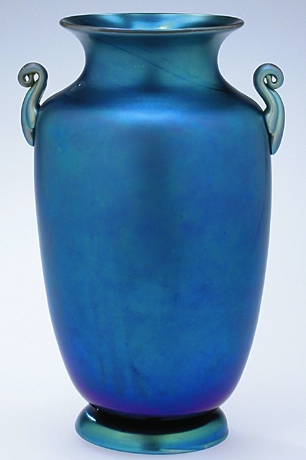 If the Carder years were marked by a preoccupation with surface and silhouette, Waugh championed line and form, leaving his large Art Deco bowls and vases untouched, save the figures and animals that were engraved into their sides. Carder may have been the one to breath life into Steuben, but Waugh let there be light, taking full advantage of the technological breakthroughs in clarity that had been achieved by Corning glass chemists.

As this new direction took hold, countless pieces from the Carder years were destroyed in a purge that Corning residents called “The Smashing,” which makes Steuben objects from the 1910s and 1920s particularly collectible today. Whether the same economic benefit will carry over to pieces from the Waugh years (or the postwar Walter Teague era that followed) due to Steuben’s closing is anybody’s guess, but lots of sellers will no doubt try to make such claims between now and the end of the year.