In this article, the late Ted Althof, who was known as Papa Ted, gave us an in-depth history of decorative dimestore Christmas village houses and other vintage Christmas decorations. A page at CardboardChristmas.com is now devoted to his memory and interests.

The following is a history of these wondrous little artifacts called cardboard Christmas village houses – a history devoted to establishing some way of categorizing them and putting them into chronological perspective.

It’s a tall chore, because these were small-change notions, not expensive nor considered serious enough to impart model numbers, cataloging, and so forth by those who made them. Even the cheapest 59-cent Christmas light sets had numbers collectors could refer to. Not so the little Christmas houses – especially the Japanese houses. To this day, no Japanese OEM product line catalogs have been turned up (at least by me).

The sleuthing has been addictive and I cannot lay it down. Because of the doors and windows, styles and methods of construction, I’m convinced that a single Japanese company made them all. I cannot find the name of that company, even with a solid contact in the Japanese Business Embassy in Detroit. But I think I have managed to gather a fair amount through little clues and evidences that have provided telling insights along the way. If anything of this kind turns up for you, I hope you will share! This story is FAR from over!

The American “Five and Dime” and the mail-order catalog had grown into national institutions between the 1880’s and World War I, but the truly “Great Golden Age” of the American Dimestore Christmas occurred between the two Great Wars: World Wars I & II.

Two names are foremost to be credited with the origins of our American Christmas holiday trappings: The Butler Brothers of Chicago, who in the 1860s invented the concept of the low-priced open display counter from which all “dimestores” sprang; and F.W. Woolworth, who went abroad and provided product encouragement and a vast marketplace – first to the German and then to the Japanese holiday and toy industries, enabling both to bloom and thrive.

Prior to WW I, most everything toy and holiday was German. Traveling Europe extensively in the 1890s in search of merchandise for his stores, Woolworth came upon a small glass Christmas ornament cottage industry in the Thuringen Valley region of Germany, sent some home for a trial, and the rest is history. Germany was already famed for cheap and charming toys and cuckoo clocks, but America had not seen the glass Christmas tree ornaments. Demand was instantaneous and insatiable. The words “German” and “Christmas” became synonymous.

WW I changed everything. Even several years before America entered the fray, the supply of German goods became unreliable and then totally dried up. Woolworth again set out for foreign shores, but in the opposite direction – this time to Japan, with whom we were not at war. There he did what he had done in Germany some 20 years before.

It is fascinating to speculate on the obstacles he surely had to overcome, trying to communicate the kinds of things he wanted to a vastly different culture that had had no idea of Christmas whatsoever. Germany was long steeped in Christmas traditions and had practically invented the Holiday, but to the Japanese it was alien and new. History proves F.W. did it, somehow, but the curious aesthetic nature of so many of the Japanese items from those times remains of never-ending fascination to collectors.

In the 1920’s, as inexpensive series lights lit up the average American Christmas tree with blazing color, the middle-class American Christmas came alive with unprecedented electric light and sparkle. Delighted to discover the sheer size of their new marketing opportunities, the Japanese expanded explosively into all holiday product areas and were anxious to sell to anybody. F.W. had no monopoly, and soon Japanese Christmas goods were to be found in every “five-and-dime,” the department stores, and mail-order houses.

Thus, the phrase “Made in Japan” came into the American common vocabulary in the “Roaring Twenties,” and German things began to creep back in again during that decade. The Great Depression, for all its strife, was absolutely rich with Christmas – to say nothing of radio, fabulous cars and electric trains and talking motion pictures. If you had a job and money in the 1930s – and 75% of the workforce did – you had an unprecedented cornucopia of wonderful things to choose from.

Sometime around about 1927-28, the ever-innovative Japanese came up with the little cardboard houses – a logical, but brilliant outgrowth of the candy/surprise-box houses they’d been making for some time. Colorful and delightful “eye-candy” on those open counters, they were an immediate sensation, hitting the American Christmas with all the impact that bubble lights enjoyed post-war.

There was such an explosion of creative genius and innovation put into these little dimestore notions that it is hard to comprehend! So many different kinds came out in such a short amount of time! Such creative and imaginative – sometimes even bizarre designs and handwork –

produced in staggering quantities by virtual slave labor in conditions of abject misery.

It was unbelievable what you could buy for a quarter or a dime, so blissfully unaware what great suffering lay behind our delight in bright and inexpensive things. But they have forever made a place in the Christmas memories and traditions of so many American families. And like so many things we’ve loved – we did not begin to appreciate them ’till they were gone …or the untold thousands who produced our dimestore reveries in long days of misery and toil.

I am sorry if I darken the bright joy of these things for you. But these are the facts of it, and I believe the hundreds of dollars that serious collectors now pay for exceptional examples are quite justified. They cannot be produced again for anything like the pittance they brought to their creators then. That people suffered and perhaps even died in sweat-shop conditions producing them imparts a significance undeniable. It couldn’t have been total darkness, though. Not altogether. The sheer delightful whimsy of these little marvels shows that someone took considerable pleasure in their creation.

The End of an Era

WW II put the second bookend on this shining row. The period of the truly finest houses was less than ten years. By 1937, war was looming in minds everywhere. The trend was toward the “realistic,” and one sees it in the toys and model trains. Less the whimsical bright fantasies of earlier that decade, they were becoming models, now, and trending ever more toward scale and accurate detail. We had to be “realistic,” now. Put the childish fantasies away and view the dark clouds burgeoning with the clearest kind of eye.

Through the War and to the present day, Christmas village houses have continued in some form. They make some really nice ones even now, but it is not the same. The innocence and simplicity of those first Golden Days” when they were bright and newly born can never really be again. 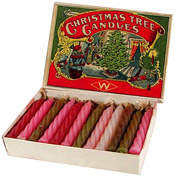