Our Bodies, Our Stilettos

A writer explains the reasons behind her love-hate relationship with high heels.

Behold the power of the stiletto heel. Despite all the advances women have made, it’s one fetish we can’t seem to escape, a paradox epitomized by “Sex and the City.” The characters embodied a late-’90s vision of independent women, enjoying the spoils of feminism: They had the financial power to support themselves, and the personal freedom to sleep around. Yet, they turned into swooning schoolgirls at the sight of a pair of Manolo Blahniks. 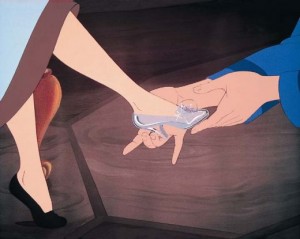 Collectors Weekly recently interviewed Elizabeth Semmelhack, a curator at the Bata Shoe Museum in Toronto. In our Q&A, Semmelhack details the fascinating history of heels, how initially high-heeled shoes helped keep women, who were seen as irrational and frivolous, powerless—and then how the stiletto endowed women with another kind of power, explosive sex appeal.

“What I find interesting is that when the war was over and men came back, fashion brought itself into closer alignment with men’s ideas of female desirability,” Semmelhack says in our interview. “I think that was a very potent part of the stiletto’s success.”

Stilettos, she explains, fell in and out of fashion over the decades, but they were a fixture in erotica for men. When stilettos are in vogue, so are tight, revealing clothes.

“In 2000, the New York Times wrote, ‘High heels are women’s power tools,'” Semmelhack continues. “What’s problematic about that is that the power that is supposedly wielded by women in high heels is sexual power. And so it seems like what wins for women in the culture is not the Harvard education that you have and how many cases you correctly argue in court, it’s whether or not when you walk into a room, you make all the men want to drop to their knees.”

In exchange for this almost talismanic sexual power over men, modern women sacrifice a lot — the ability to walk or stand comfortably for a long period of time, and more importantly, the ability to run fast when attacked. Stilettos, literally, render women less physically powerful. With so many comfortable-shoe options available now, who would bother with this ridiculous footwear without such an intoxicating promise?

Personally, I have a complicated relationship with heels. I can’t wear them without suffering a tremendous amount of pain.

When I was 19, a doctor informed me that my left leg is one full inch shorter than my right. My legs grew that way to compensate for the 36-degree scoliosis curve in my back. He prescribed me a half-inch prosthetic to wear inside my left shoe, so I could walk across the University of Oklahoma campus without creating the back cramp that had been keeping me up all night. The day I had my $75 lift made, I was wearing Chuck Taylors. It was too wide for my girlie shoes. 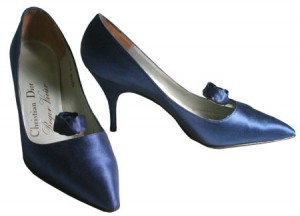 Roger Vivier is credited with designing the first stiletto. This pair for Christian Dior is from 1960 - 1963.

Naturally, I ended up with a rainbow assortment of Chuck Taylors, as well as a few of those chunky shoes that were so stylish in the ’90s. No stilettos, no sandals, no clogs. As a 25-year-old copy editor, I went to Nordstroms in downtown San Francisco to look for shoes. I specifically wanted to replace a pair I’d worn out or lost. They were soft black leather shoes, very similar to men’s dress shoes, each with a cute belt strapping over the top, buckling to the side. They were perfect for work pants and jeans.

As I walked around the women’s shoe section, I became consumed with despair. I saw nothing but sky-high heels. When I asked the salesman if he had any shoes without heels, he gave me the withering look that telegraphed high-end disgust, “No. Of course not.” Silly me.

The next season, ballerina-slipper flats became all the rage, and my new scoliosis doctor informed me it was better to wear the prosthetic outside my shoe. Any cobbler could do it for $30. Suddenly, I could have pretty shoes again. Heels, too, can be modified somewhat to accommodate my lopsidedness, and the doctor insists with the correct lift, heels don’t hurt me more than other women. Yet every time I wear them, I get that stabbing ache in my back for days, and I think, “Why did I do this to myself?”

Despite all this, like Carrie Bradshaw and her friends, I’ve fallen under the spell of these shoes, more than once, with their delicate, curving construction reminiscent of the most elegant French furniture. A high-profile job interview turned into an excuse to search in the forbidden land of heels. I found a shiny deep red pair with delicate cross buckle I couldn’t resist. Deep in the cardboard-and-tissue-paper recesses of Shoe Pavilion, I excavated a pair of designer Italian stilettos, very well crafted, with stitched brown leather, offered for a fraction of their original price. 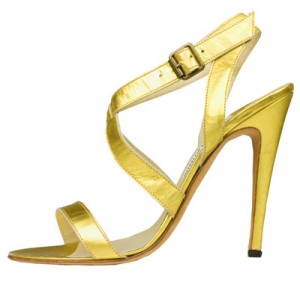 The TV show "Sex and the City" made shoe designer Manolo Blahnik, as well as his stilettos, a household name.

That Christmas, my mom and I stumbled on a vintage-looking pair of heels in a houndstooth fabric, with scalloped faux-alligator trim and a faux-alligator strap. They were cheap, on sale, and something irrational in both of us wanted me to have them. These shoes, I mostly just put them on while sitting down, and admire how my feet look in them. I have brought them with me on a date. In pictures, I pretend I’m wearing them.

For a long time, though, heels weren’t so pretty to me. Thanks to images I saw at New York’s Museum of Sex, I couldn’t walk down Fifth Street in San Francisco without catching site of stilettos in a window display and thinking, “Deer hoofs!” And then I’d physically shudder.

The image that popped into my mind was a photograph of a Chinese woman’s folded deformed foot, which had been bound until it had taken the shape of animal’s hoof. High-heeled shoes looked to me just like those poor women’s feet, mangled in the name of sex appeal. Like stiletto-wearers, they couldn’t walk or run far—only it was a permanent condition.

Even as kids, we watched Cinderella’s ugly stepsisters try to cram, even fold, their big, mannish feet into her delicate glass slipper. This fairy tale, it shouldn’t shock you to learn, has origins in ancient China. Disney’s animated version hit the United States in 1950, right after the war, and right before stilettos came out.

Thankfully, Semmelhack—who collects and admires beautifully made vintage heels and stilettos for the museum—questions whether appealing to men sexually should be so important to women.

“If the high heel is an accessory of female power—and if the definition of female power is sexual—that power has a very short shelf life,” she says. “Is a 90-year-old woman in spike heels powerful or silly? Is a 12-year-old girl in spike heels powerful or inappropriate? If her power is based simply on her sexuality, then that’s a very limited amount of time that women are permitted to be powerful.”