This article focuses on the history of pottery made in Somerset, Massachusetts (also known as Pottersville) in the 19th century, noting the items produced and important craftsmen. It originally appeared in the February 1946 issue of American Collector magazine, a publication which ran from 1933-1948 and served antique collectors and dealers.

Many times I had read the name “Pottersville” over the door of the little Post Office, but it was not until the hurricane and “tidal wave” of September 21, 1938, deposited a pottery jug in my dooryard at Somerset, Massachusetts, that my interest was aroused. 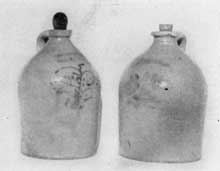 It was a gallon-sized jug of light brown pottery with a thin transparent glaze. A wooden stopple made the jug watertight, and it had “floated in” without any damage, other than a small chip on the rim of the mouth. Upon examination, I found the words “Somerset Potters Works” impressed on the shoulder of the jug, and below the printing, a scroll decoration in blue.

I inquired of one of the older residents of the town, if there had ever been any potteries in Somerset, and he replied, “Why yes, at Pottersville,” and mentioned the names of Synan and Hathaway.

Pottersville is the name given to the central section of Somerset. I had always presumed that it had been named for an early settler by the name of Potter, and had never associated it with potteries. Located on the west bank of the Taunton River, the town is rich in Indian tradition. After the King Philip War, Somerset, or Shawomet as the Indians called it, was taken over by the Plymouth Colony, and became known as Shawomet Lands. In 1667, the section was sold to twenty-nine “Purchasers” from the Plymouth Colony, many of whom settled there. From that time, until 1790, when it was incorporated as the town of Somerset, it was known as “Shawomet Purchase.”

Like other New England settlements, Shawomet Purchase was dependent upon its own efforts for the making of household articles, and tradition tells us that the Chace family, who had learned the art of pottery making before they left England, set up a pottery in their home as early as 1705. Facts regarding this pottery are lacking, but there is no reason to doubt that a pottery of some sort did exist at this early date. 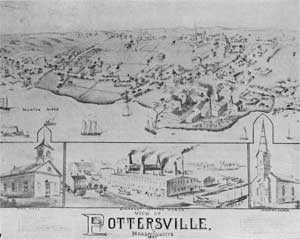 Topographical view of the settlement with detail of Somerset Potters Works centered at bottom.

In 1815, Clark Chace, probably a descendant of the early potters, became the owner of “a site of land for a pottery,” as set forth in a deed of that year. During the following years, other potters followed the example of Clark Chace, for John Warner Barber, in “Historical Sketches,” published in 1839, states there were seven potteries in Somerset at that time. He does not list them, however.

Eighteen-forty proved to be an important year in the history of Pottersville, for in that year, Clark Chace Jr. with his brothers Benjamin and Leonard, built the plant which gave Pottersville its name. They imported workmen from England, and produced a hard, glossy stoneware, instead of the cheaper earthenware previously manufactured. Their mark was impressed, L. & B. C. Chace, Somerset, Mass.

In 1847, the Somerset Pottery, located on the west bank of the Taunton River, was incorporated, and the manufacture of bean pots, bowls, crocks, milk pans and preserve jars was begun. The plant prospered for many years, as orders for these goods poured in from all over New England. In time, however, as methods of heating and cooking changed, there was less call for these articles. The buildings were old, and had become so badly in need of repair, that in 1882 the stockholders reorganized, and began the manufacture of a new line of pottery, which included acid vats for bleacheries, snuff jars for a New York tobacco firm, and jeweller’s dipping baskets, used by the jewellers in a plating process.

These pottery baskets were cylindrical in shape, about 8 inches in diameter and 12 inches high, perforated on the bottom and side, and fitted with a handle across the top. The story is told that when the dipping basket was put on the market, an ingenious housewife decided that it was just the thing to use for a vegetable basket when she made a boiled dinner. When the vegetables were “done,” she lifted the basket, and the water drained out through the holes. The idea took with her neighbors, and there were a number of repeat orders for this purpose.

The acid vats were 2 feet high, 18 inches in diameter, with rounded sides, and a 5-inch lip for pouring. They were equipped with four ear-shaped handles, so that they could easily be carried when full. They were finished with a salt glaze over a slip glaze.

Other interesting products were the pottery bed warmers, 1 foot in length, flat on the bottom, rounding to 3 inches in depth on the top, with an opening for filling with hot water. Also the large water jars, cylindrical in shape, 2 1/2 feet high, 1 1/2 feet in diameter, for keeping the water cool.

It seemed the natural thing that this pottery should manufacture stove linings, as the town of Dighton, famous for its stove foundries, adjoins Somerset on the north, and made a handy market. Tiles were also made, and it is said that the white enamelled tiles used in the building of the South Station in Boston, were made at this plant.

There were no clay beds in the vicinity of Somerset, and all clay used at the potteries came by boat via the Taunton River. It is said that when the Gay Head Indians on Martha’s Vineyard, felt the need to barter, they would appear unannounced with a four or five-ton boat load of Gay Head clay. They were not to be depended upon however, and for the most part, the clay was brought from Gardner’s Island in Long Island Sound. Clay of a better quality was later imported from New Jersey.

There were also a number of small potteries in Pottersville, which were owned and operated by men who had learned their trade at the Somerset Potters Works and elsewhere. 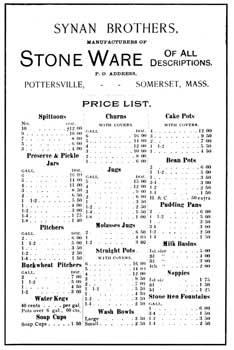 Price list of stone ware made at the Synan Bros. pottery.

Samuel Purington operated one of these potteries. It was located just off Wood Street. Later this pottery was operated by Samuel’s son, David Purington, and a third owner was Samuel B. Collins.

George S. Purington set up his pottery on the water front, just south of the Somerset Potters Works.

About 1893, William and Patrick Synan, brothers, located their pottery on Centre Street near the Pottersville Post Office. Their specialty was bean pots, and they could turn out twenty-five dozen a day. Many a Synan bean pot found itself on a peddler’s cart, and thence to the oven of the New England kitchen, where it held the Saturday night supper of baked beans. The workmanship at this pottery was of high grade, but in 1912, it closed its doors, due to the small margin of profit.

Thomas Kenney located his pottery on the south side of Center Street.

Dexter Purington’s crucible works were on Center Street, across from the Synan Pottery. He never operated his pottery which was nearby.

The site of George Brown’s pottery was at the foot of Cusick’s Lane.

Charles E. Hathaway’s pottery was on Luther Street between County Street and Riverside Avenue. Mr. Hathaway learned his trade at the Samuel Purington pottery. He could turn out practically any type of article, but his specialty was crocks. He closed his pottery in 1911.

StonewareStoneware is the roughhewn cousin of porcelain. Like porcelain, it is fired…