The Beer Can That Brought Them to Tears

Today’s guest blogger is breweriana collector Barry Travis who runs the web site IBuyOldBeer.com: Preserving the Beers of Yesteryear. You can find him on Show & Tell, too. 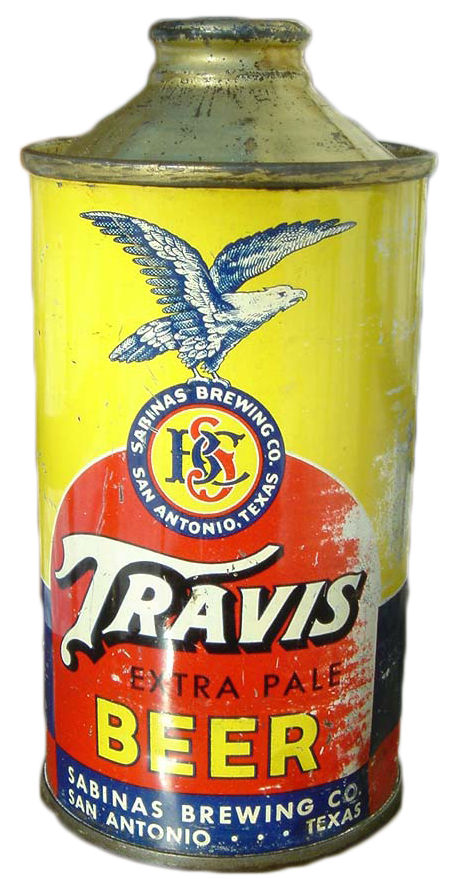 As a sixth grader assembling my can collection from the ditches of Minnesota, I found a book showing all the elusive rarities in the beer-can world. I was amazed at the variety, colors, and sizes made throughout the years. But my Holy Grail can, which I discovered in this book, was the Travis cone-top beer can made in the mid-1930s in San Antonio, Texas. Not only was this an early can, it also was a beer named after me. I had to have one.

Fast forward to 1996, when my parents threatened to recycle my childhood collection. Instead of tossing all of them out, I kept a dozen of the best ones and started collecting beer cans seriously. This time, my focus was on condition and rarity, and now that I had a job, I could actually purchase the cans I wanted. But my namesake can could not be found, until 1997 when I actually held one in my hands at a local breweriana show. Dick, the owner, had found this can in an antiques mall—a soldier stationed in Texas had carried it in his rucksack home to Minnesota. I told Dick how I’d only seen this can in a book, and took his name so we could keep in touch.

Five years later, his wife passed away, and he lost his passion for collecting. He told me I had first dibs on the Travis can, so I assembled my hopes and wallet to see his wondrous collection. I could see how sad he was, as he told me of his wife’s passing. The collection was amazing, and the can … well, it was more than I could afford, sadly. I took a copy of his wife’s obituary and picture with me, knowing we would see each other in a few weeks at the same show we’d met at years earlier.

At the hotel beforehand the show, I had a surprise for Dick. Knowing how much his wife had meant to him, I handed him a framed pencil portrait of her and left. If I stayed, I knew we’d both break down. I had a feeling he’d treasure it, and that thought made me smile.

But the tears came the next day. As I saw him, he approached with watery eyes and told me it was the single nicest thing anyone had done for him. He put his hand on my shoulder and said he’d told his kids about the picture. He then handed me the Travis can. I was speechless—and dumbfounded. I tried to turn it down, but he insisted. He asked if I’d ever sell it. Through my blubbering and smile, I assured him that it would be admired and treasured while I was on earth to enjoy it.

Although I have many of these cone-top cans, none will mean as much to me as my Travis can. Thanks, Dick.