Ironclad Patriotism: When Germans Gave Up Their Gold Jewelry to Battle Napoleon 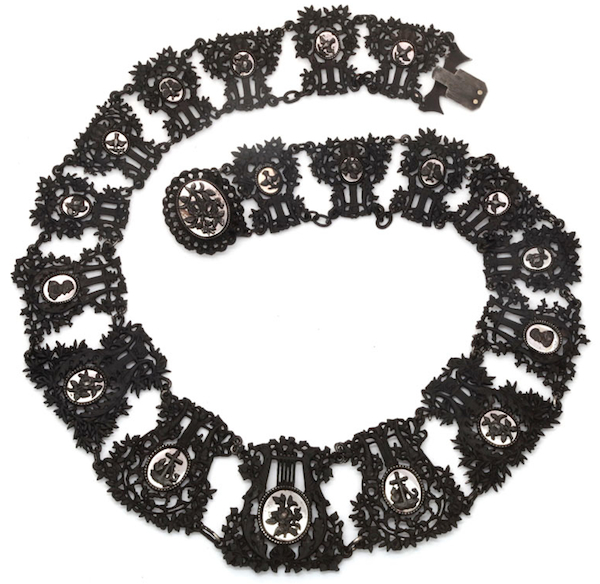 During World War I and World War II, the mothers, sisters, wives, and girlfriends of Allied servicemen wore pendants and pins proclaiming their support for their loved ones fighting overseas. But as Netherlands-based Georgian– and Victorian-era jewelry collector Agram.m reminds us (that’s her username on Show & Tell), these pieces of sweetheart jewelry, as they are called, were not the first examples of baubles used to proclaim one’s support for a war effort.

“In the early years of the 19th century, citizens of what is now Germany, then called Prussia, were called upon by members of the royal family to exchange their gold and silver jewelry for Gothic-looking pieces of ornamental iron jewelry,” Agram says. The precious metals were sold to finance Prussia’s part in the Napoleonic Wars, which raged across Europe and beyond from 1803 to 1815. 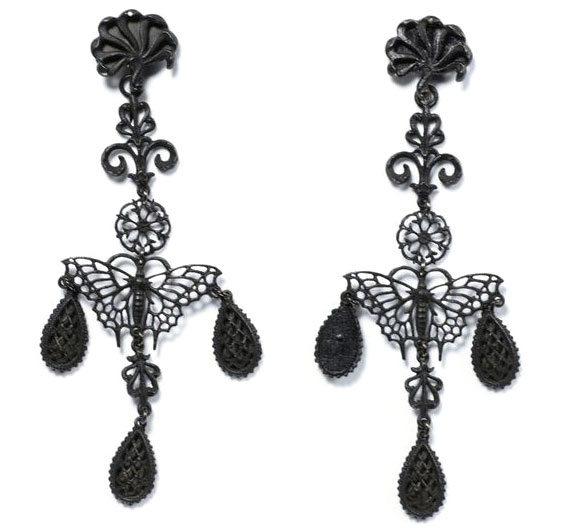 Top: This Berlin iron necklace from the early 1800s features iron cameos backed by mirrored steel. The anchors are thought to symbolize loyalty. Photo via 1stDibs. Above: These butterfly earrings were designed by Siméon Pierre Devaranne. Photo via the Victoria and Albert Museum.

The roots of this “Berlin iron” go back to 1804 and the establishment of the Königliche Eisengießerei (the royal foundry). “When the foundry opened, its portfolio included cast-iron utensils, vases, candlesticks, bowls, plaques, and medallions, as well as larger objects such as garden furniture, fencing, and even bridges,” she says. But the ongoing war with France spurred a trade in iron jewelry, which artists produced in 1806 using the same lost-wax casting process as many types of fine jewelry.

“Citizens adorned themselves with Berlin iron to show how patriotic they were,” says Agram. “The jewelry, which was also produced by private ornamental iron jewelers such as Johann Conrad Geiss, often bore slogans like ‘Gold gab ich für Eisen’ (I gave gold for iron) or ‘Für das Wohl des Vaterlands’ (for the welfare of our homeland).” Geiss’s bracelets and necklaces were sometimes also signed “Geiss à Berlin.” 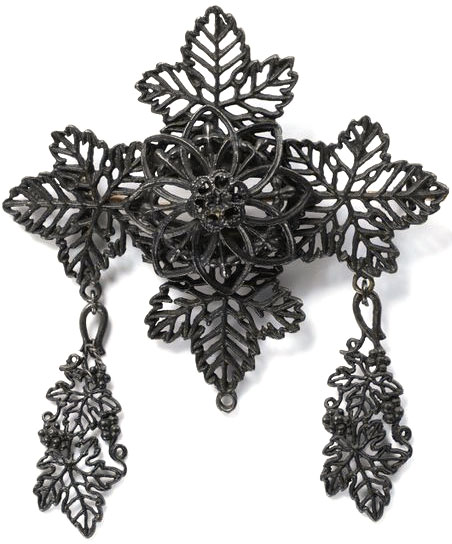 This leafy brooch is thought to have been designed by Johann Conrad Geiss. Photo via the Victoria and Albert Museum.

Berlin iron, says Agram, has a number of distinguishing characteristics. Because they are made of iron, the pieces are magnetic. Iron, of course, rusts, so the pieces were blackened to seal them from rust-producing moisture in the air, usually with a lacquer made from flaxseed. Finally, small rings were used to connect the individual sections of a Berlin iron necklace or bracelet to each other, giving some pieces an armor-like appearance.

“Because of their black color,” Agram adds, “they were also worn as mourning jewelry, although they are not considered mourning jewelry, per se. They were mostly a symbol of patriotism and loyalty to country.” 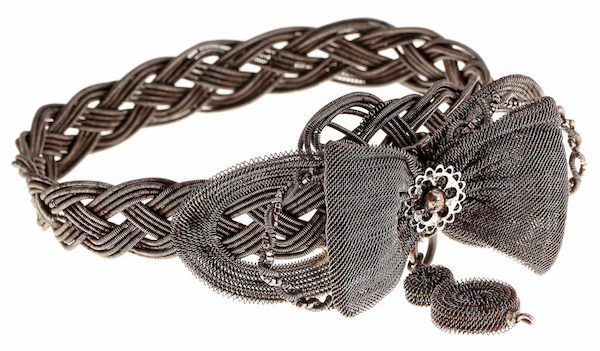 This example of Silesian wirework bears the mark of Johann Conrad Geiss. Photo via Bell and Bird.

A close cousin of Berlin iron, in appearance if not lineage, is the so-called Silesian (Silezich) wirework, whose origins Agram describes as “one of the mysteries of antique jewelry.” Dating from the late 18th to the early 19th centuries and thought to be a product of what is now the southwestern edge of Poland, these wire-mesh bows, crucifixes, and floral shapes “are often grouped with the iron and cut-steel jewelry from Berlin,” Agram says, “but no one really knows who first made them or where they originally came from exactly. In ‘Warman’s Jewelry Identification and Price Guide,’ the late jewelry historian Christie Romero suggests the name could have been invented by collectors.”

(To learn more about Berlin iron and Silesian wirework, visit Agram’s collection on Show & Tell. Images via the Victoria and Albert Museum, and Bell and Bird.) 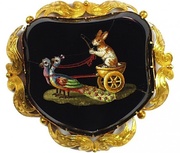 Treasures of the Incomparable Pforzheim Jewelry MuseumWomen and Children: The Secret Weapons of World War I Propaganda Posters

Sweetheart JewelryMany of the U.S. servicemen who crossed the Atlantic to fight in World War …