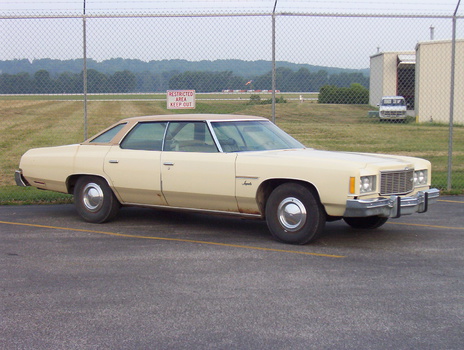 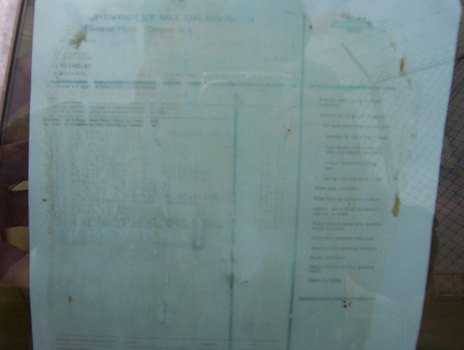 Several years ago, I was able to obtain the actual 1975 Chevy Impala that I had driven in Drivers Education the same year.
(flashback) The local dealership provided brand new Impalas that year and after the class was over, they were returned and sold as "Dealer Demos" each one having 1500 to 2000 miles on them.
A friend of my aunt just happened to buy the one I had assigned to me during the summer school class. I initially thought it was cool for it to stay "in the family" so to speak and I saw it a few times after that but then forgot about it over time.
32 years later, I had an excavation business and was working for a friend who had just purchased a very over grown lot in our town. It had a couple of old garages, a shed and an old mobile home that the roof was caving in.
My friend had hired me to clean up the lot and tear down and remove the mobile home. While I was on the backhoe one day, he walked up to me and stated, "You wouldn't be interested in an old car would you?". He went on to explain that in one of the garages, there was an old car that he wanted to get rid of for a reasonable price so he could later resell the lot after things were cleaned up.
During my next break I walked over to the dilapidated old garage and looked inside. The windows of the garage were coated in a heavy coat of dust both inside and out, but I wiped away what I could and peered inside, just barely making out the tail lights. I remember thinking at the time, this appears to be a Chevy about the same year as I had driven in Driver's Ed. Class all those years ago.
The roll up door was off it's track and couldn't be raised so I proceeded to the side entry door of the garage and with some effort managed to get it open.
As you might remember, cars of that era were boats to say the least, and this one fit in the old garage bumper to bumper.
I carefully squeezed through cobwebs, junk, you name it until I got to the passenger side front door, and opened it cautiously. I was shocked to find the interior was almost pristine! Other than being a little dusty, it looked like new! I opened the glove box to see what information I could find and to my amazement, the registration was made out to my aunts friend! THIS WAS THE CAR I HAD DRIVEN BACK IN 1975 and the odometer read only 24,842 miles!!!
I was so excited and worked off the car with a few of hours back hoe work.
I hauled it home on a flat bed trailer and a friend of mine helped me to remove the plugs and spray oil into each cylinder and put a new battery in it. I carefully hand cranked the engine before replacing the plugs. We added a little gas to the carb, hit the key and it started immediately!
The tires were dry rotted, so just to get it on the road, I found a used set and put them on to get it drivable. We cleaned it up and it drives like a dream! Upon more investigation, the miles match up to the paperwork found in the glove box and on the door! It really has just over 25,000 miles on it now. You can still make out the dealer sticker in the window!
Thanks for reading, Bob