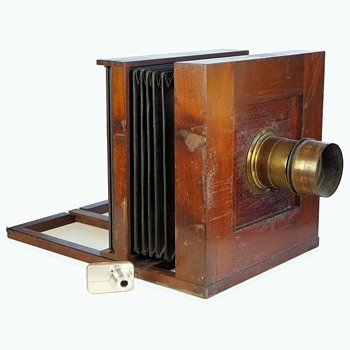 This is the largest early camera in my collection and, as you can see, it dwarfs a modern point-and-shoot digital camera. Imagine lugging this 35+ pound, 11 x 14 inch format behemoth around in the late 1850s! Making things more interesting, this is a wet collodion camera which means that photographers needed a portable darkroom ... usually a wagon ... filled with chemistry, glass plates and an assistant or two. This is because plates had to be prepared, pictures shot, and images developed before the chemistry dried out.

While not pristine by any means, I love the worn character of the camera with all its collodion chemical stains, marks and so forth. As a side note, I consider collodion stains a ‘badge of honor’ that this camera was heavily used in the field. While there is always a desire to get a clean camera, you would never refinish the wood for something like this.

The large 17" x 17" front and rear standards mounted on 25-inch folding rails must have made this a formidable camera in the field. Construction details point to a "box" (as cameras were called during this time) dating to the late 1850s to early 1860s.

Identifying early, unmarked cameras is always an adventure. Makers often borrowed ideas from each other, resulting in many cameras looking alike. It also makes life difficult for collectors (such as myself) who "need to know" about the lore and legacy of early equipment.

Clues to unmarked cameras are found in the smallest details. For example, the camera body is assembled with hand-cut dovetails instead of finger joints. While finger joint construction is typical for many other wet plate (post daguerreian) cameras, dovetails on American cameras made during this time are unusual.

Research attributes the builder to be Ebenezer Gordon (b.1817). Based on information obtained from a descendant cousin, Gordon entered into the photographic trade during its early years and was listed in New York directories as a plate maker (1847-1848), daguerreian frame maker (1851-1852), daguerreian supplier (1860) and photo materials salesperson (1869). Experience as a plate and frame maker probably gave Gordon a specialized insight into photographer's needs that led him to invent and patent an improved plate holder.

So be glad there are small, pocketable cameras and smartphones for most of your photographic needs!