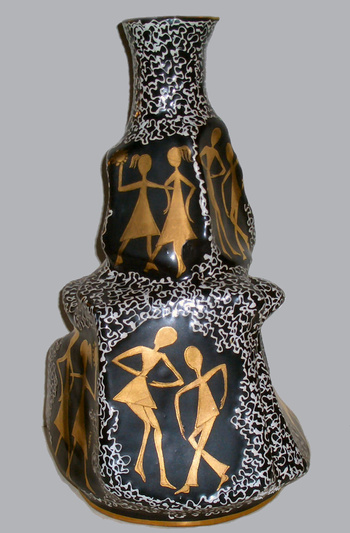 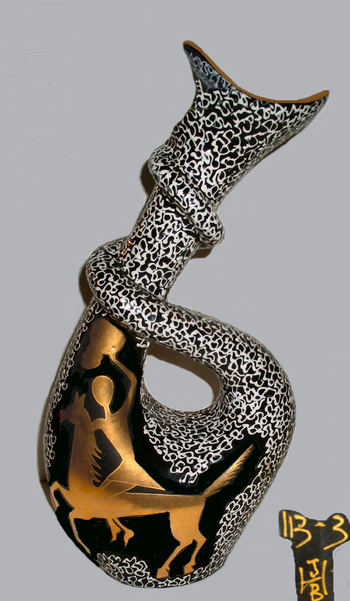 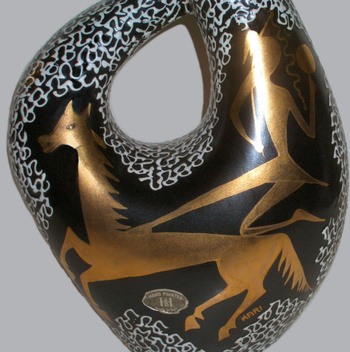 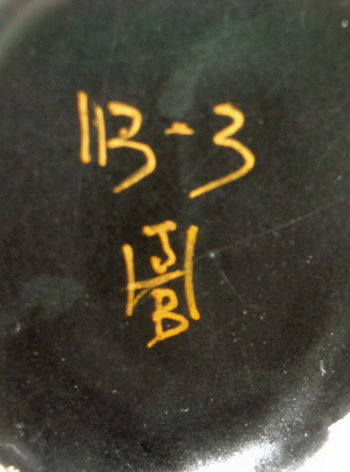 This Italian pottery has intrigued me from the first time I saw a piece. That is a bad thing because I wound up buying it. In the 4 years or so that I have owned it I have only seen two other pieces. One of them is part of the collection and the other was a bowl that got away. I have search for HJB and JBH pottery but have not found the proper name for the pottery company. I believe the bowl was also signed by the same artist, but I can't be 100% sure. I am hoping someone has more information on the pottery and the artist MARI.
The dancers vase is quite large measuring 13 3/4"h x 9" at its widest, top is 2 5/8" diameter with the base at 6 3/4" diameter. It has 8 panels decorated in gold featuring dancers, within 2 of the panels one of the girls is playing a tamborine. Each panel features rock and roll dancing which I find to be really very cool with the guys are wearing bellbottoms. lol It is signed MARI on one of the panels and on the underside has the pottery mark, but it is very difficult to make out being that the glaze is just too thick.
The second vase is by the same company and is fully marked in gold on the underside (monogram HJB with what is likely pattern and model numbers). Signed MARI on the closeup pic along with an oval foil sticker which reads Hand Painted HJB (monogram) Made In Italy. I believe they are trick riders or part of a carnival act. Both are perforning tricks as they ride their horse. Both vases have heavy drizzle white glaze and this one like the other is painted using gold. Measures 11 7/8"h x 6" at its widest, with the base measuring 2 1/2" x 3". There is also a serpent wrapped around the neck which leads from the body of the vase.
I had to do some restoration on the horseriders vase, the top was broken but the vase was so cool in my eyes that I knew it would be worth the effort. I get alot of enjoyment seeing them even though the company name is still a puzzle.
If anyone knows the name of the pottery I would love a message. Thanks all for your help.