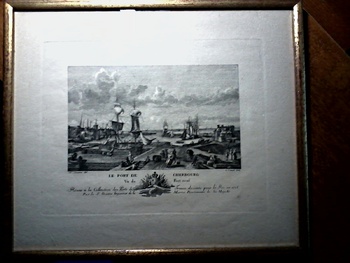 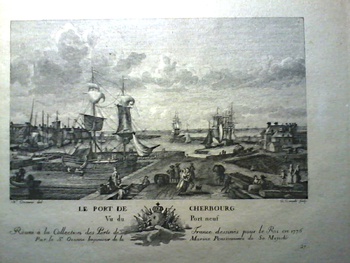 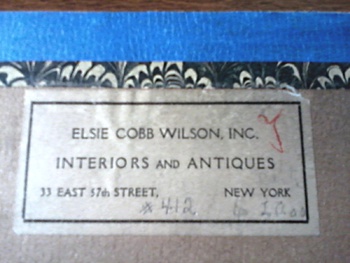 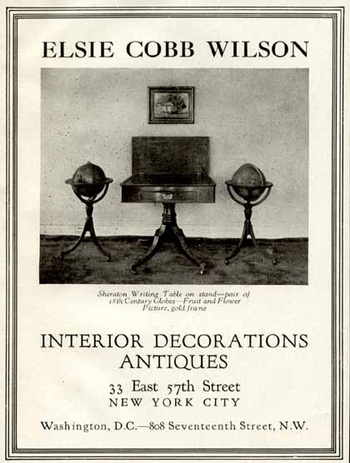 Finally found something neat at GW today. Researching this led me down a very interesting path. It's an engraving originally by Nicolas-Marie Ozanne (12 January 1728 – 5 January 1811) He was a marine artist and engraver and created a series of 60 views of various ports in France. This one is titled "Le Port De Cherbourg" #37. I looked online and found one like this but it was by a different engraver "Y. le Gouaz" Mine says engraved by "G. Canali". The dimensions seem right and it's on heavy paper that has an embossed border around the engraving. It could just be and old reprint but I'm not sure if it's from the original plate or not. When I opened it up to clean the glass I found the original back had been turned over. On it was the blue paper border and the Elsie Cobb Wilson label. The engraving has some penciled numbers on it and priced $ 10.00. The same numbers and price are on the stores label. So this came from one of the best interior design companies of the 20th century.Elsie is up there with the great Dorthy Draper and some of the other great women designers of the era. Ten bucks sounds cheap by today's standards but in 1918-1930 it was a bit of money. -Mike-

1918 Washington’s Elsie Cobb Wilson, another of the era’s so-called great lady decorators, sets up shop in New York and continues her successful career, creating the interiors of U.S. embassies in Peking and Tokyo. Her style focused on comfort and refinement. Lucy Rutherford, the woman with whom FDR was romantically involved for many years, worked in Wilson’s Washington shop. When Eleanor Roosevelt demanded an end to the affair, it was Wilson who convinced Rutherford that it was best for the country to end things