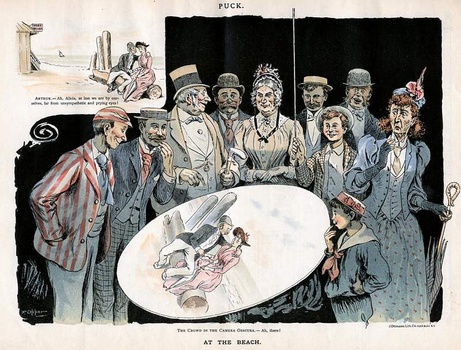 When we think of 19th century advertising and magazine images, black and white illustrations come to mind. Rarely do you see color. Here is an exceptional example of a 9 x 12 inch original chromolithographic (multi-color) print that appeared in the July 1890 issue of PUCK. Better yet, it has a photographic theme depicting a small gathering of people inside of a free-standing camera obscura who are spying on a romantic couple.

Although I primarily collect early cameras, this brightly colored parody is a fun addition to my collection. Showing a romantic Victorian couple who believes they are unseen [but being observed], it portrays the occasional covert use of room-sized camera obscura.

Titled “At the Beach”, the couple shown in the upper left inset thinks they are stealing a private moment: “Ah, Alicia, at last we are by ourselves, far from unsympathetic and prying eyes!” whispers the man named Arthur. Unbeknownst to the couple, a crowd in the camera obscura observes; “Ah, there!”

While a charming example of 19th century humor, it is classic PUCK political commentary. The multigenerational audience inside the camera obscura exhibits an expressive range of emotions from prudish embarrassment to innocent wonder to voyeuristic glee ... a commentary on changing norms of the time.

The camera obscura is a precursor to modern cameras and photography. It was also an artist’s tool and means of entertainment – in this case, think of standing inside a room-sized camera and watching the outside world projected onto a table. In the 19th century, they were very popular at seaside resorts, fairs, and so forth.

PUCK was America's first successful humor magazine of colorful cartoons, caricatures and political satire of the issues of the day. It ran from 1871 until 1918 and believed to be the first magazine to publish color lithographs on a weekly basis. 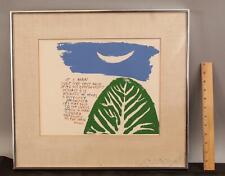 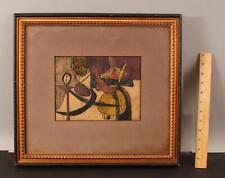 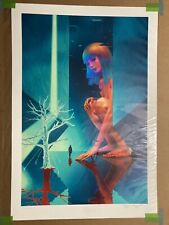 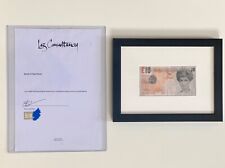