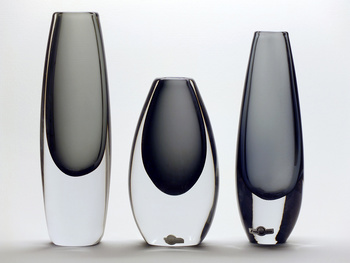 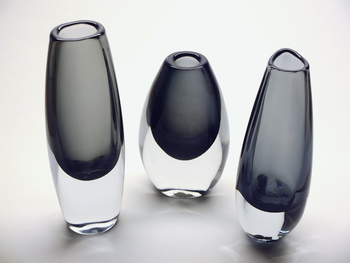 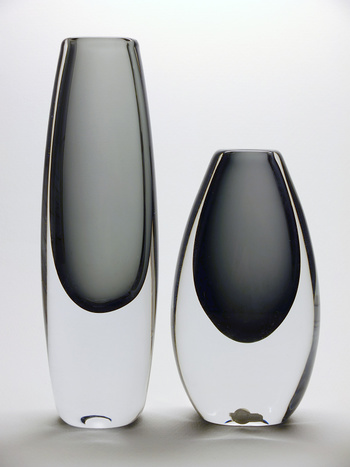 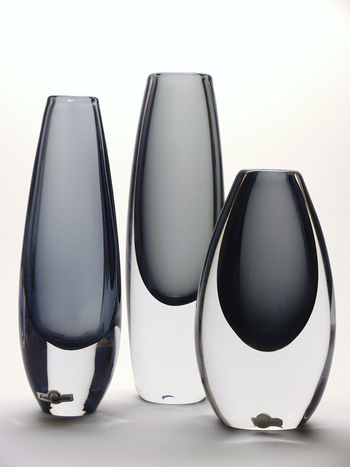 If one compares the Swedish and Scandinavian glass with contemporary glass from other parts of the world, I feel that it stands out quite clearly . The shapes are cleaner, more innovative and modern than glass from other countries. One can see that in Sweden we really focused on the involvement of educated and forward-thinking artists in production, more than anywhere else. Beautiful everyday products and glass that ordinary people could afford to buy was also a concept that came and dominated the glass industry throughout the 1900s. But I myself find they forgot this a little bit away from the 1980s onwards , and perhaps this is one of the reasons why we have very little of our once so successful glass industry left?

When artists of the early and middle part of the century saw the design of everyday glass as the most important , I believe that during the later part of the 1900s (1980s an forwards), we little forgot about this and instead saw the pure art glass as the main task? Everyday glass (the glass we would live on ) came to be "a necessary evil", and the design was developed not in the same way as it had done until then. At Strömbergshyttan I think , however, the stagnation in design started a little earlier, in the mid 1960s , when they settled down and did not take up nearly as much new models as in the 1950s. And Strömbergshyttan was not to be experimented much with pure art glass either, it still belonged to the exceptions. Simply believed that they could live on existing models as it seems. This laid the basis for the 1970s problems as I see it . Then when the machinemade tableware glass became popular around the same time , it was too much for many of the Swedish glassworks . Several of them went to the grave , among others Strömbergshyttan .

The models you see here (B936, B894 and B982) were released in Strömbergshyttans "good days" round 1959 - 1963. Artist of design is a bit uncertain. Gunnar Nylund , best known for his pottery on Rörstrand, worked for Strömbergshyttan 1952-1956 and as a freelance between 1967 - 1975. He drew lots of glass models for Strömbergshyttan during his first period 1952-56. Probably so many that they could not launch all over his lease time, but several came in the following years 1958-60. But Asta Stromberg , wife of Managing engineering Erik Strömberg, also started to draw a lot of glass (she drew some even before Nylund was contracted) at the end of the 1950s onwards. So who is behind these three models is a bit iffy. The glass at Strömbergshyttan signed usually only with "Strömbergshyttan" and the model number. Designers were reported rarely. And when the drawings for a lot of glass are not (or not yet been found ), we can now only guess who was behind many of the models, among others these. Asta Stromberg was also inspired by Nylund's modern lines and I know (from saved documents that I found) that some of his glass was taken as the basis and was renewed between the years 1957-66.

It is clear, however, that it is one of the two who designed these vases, possibly it may be a question of basic models of Gunnar Nylund, renewed by Asta Stromberg? Personally, I am quite sure that at least the high vase (B936) was designed by Asta Strömberg. The reason is obvious similarities in design with the so-called Sputnik vases (model B895) , which I know were designed by Asta Stromberg, inspired by rockets shot up the Russian Sputnik satellites in 1957. Also B982 I think is a design by Asta. It's to late to be one of the late released Nylund models, drawn 1956 or earlier (but that's my own specualtion). B894 from 1959 can be a late released Nylund model or a Nylund model (B679 from 1955-56), slightly renewed by Asta Stromberg. Se my blogs here:
http://glasbloggen.blogspot.se/2013/07/gb25strombergshyttan-b894.html
http://glasbloggen.blogspot.se/2013/06/gb21b-679-en-intressant-modell-av.html

If you look at the smoky hue, called "Smoke -gray " and named X76, it differs a little between the vases. It depends on variations in the manual production and that one can get different hue depending on the color ball is in relation to the clear glass caught an over, and how much glass have been blown up.

The models are clean and stylish shapes that are typical of Strömbergshyttans the 1950 's and 60's glass . They differ a lot from the glass Gerda Strömberg (mother in law to Asta Stromberg) designed between 1933 and the end of the 1940s for Strombergshyttan. I think Gunnar Nylund meant pretty much for Strömbergshyttans successes over the years. His forms shines through much of the production , including the glass Asta Stromberg drew.