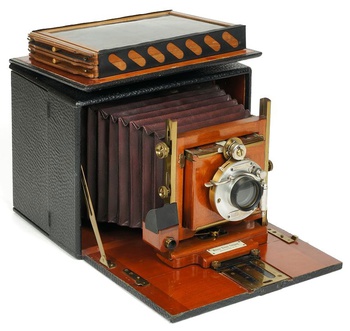 The short-lived and rare Korona Hand Camera (often referred incorrectly as the Milburn Korona after the maker’s name of Gustav Milburn), is considered by collectors as among the most beautiful of all 1890s American self-casing cameras. Its design and workmanship are first rate. Opening the black leather body greets the photographer with an expansive interior of highly polished mahogany, supple maroon leather bellows, and lacquered brass.

The very first models introduced in October 1894 appear to be the only versions equipped with a shutter having an attractive aluminum face marked “Made for the Milburn Korona Company by Gundlach Optical Co.”

The Korona Hand Camera has several distinctive features including a back that completely opens up to expose the entire ground glass; instead of the photographer having to look through a small viewing port. Additionally, two extra plate holders were held by a pair of specially designed metal brackets mounted inside of the back. This had an advantage of not having to remove the plate holders to view the ground glass. It’s a clever design and I’ve always wondered why other builders didn’t copy this design.

The front focusing arrangement is also unique. When the camera is open, the front standard could be drawn out to a bar that was secured across the focusing rail. The bar could be preset for different types of lenses which allowed the photographer to quickly focus on a subject. Fine focusing is accomplished by turning a pinion over the top of the lens box. Milburn's intention was to copy the action of "old style portrait lenses" that had a rack and pinion movement. Another key feature of The Korona Hand Camera was a split drop bed permitting it to be folded down for using wide-angle lenses.

Prior to founding the Milburn Camera Company, Gustav Milburn worked for Kodak as a sales manager then later joined Henry M. Reichenbach and S. Carl Passavant (both former Kodak employees) to form the Photo Materials Company (PMC) in 1891. He eventually left PMC in 1894 to establish the Milburn Camera Company where he created the first of what would later become the immensely popular Korona camera series. Barely two years later, Milburn sold his company.