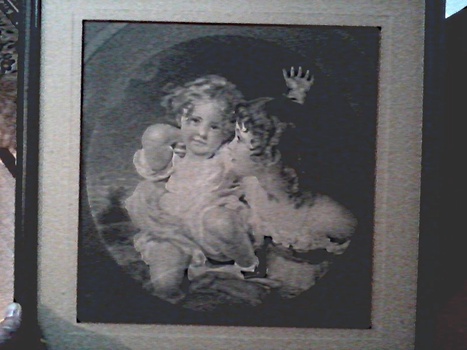 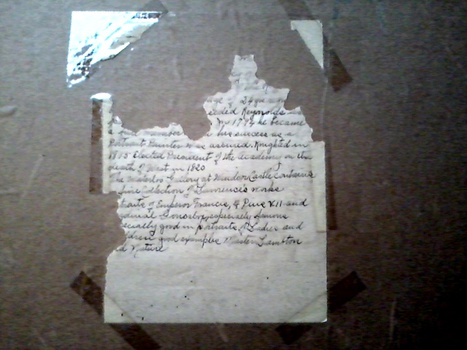 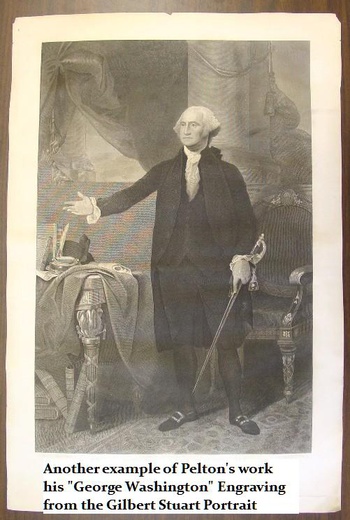 Found this nice old print with a hand written artist bio on the back by the original owner. The missing portion looks like it was the title and other info that is hidden by the matte. I removed the back and found the print itself has the title "Nature" after a painting by Sir Thomas Lawrence 1823 and then Engraved by Oliver Pelton 1857. His George Washington engraving after Gilbert Stuart's portrait was hanging in Lincoln's home. My print is actually glued to the old paper board backing. It's a bit aged and brown, there is a water stain on the print and matte but not too bad. The print is matted to be 12"x 12" with the frame it's 17"x 17". -Mike-

"Oliver Pelton" from AskArt.com
Active in Massachusetts and Connecticut where he was born in Portland, Oliver Pelton was an engraver whose specialty was banknotes. Abner Reed was his teacher and then he and Pelton formed a business in Hartford, Connecticut. In 1827, he was established as an engraver in Boston, and nine years later he was a partner in the Boston banknote engraving company of Pelton and Terry, "Oliver Pelton was a fairly good line engraver of portraits and worked at his profession up until his death in 1882. The engraving of George Washington that was engraved and published by Oliver Pelton is an interesting rendition of Gilbert Stuart's famous portrait. Another engraving by Pelton of Washington was apparently in Abraham Lincoln's home in Springfield, Illinois when he was assassinated.

Sir Thomas Lawrence (13 April 1769 – 7 January 1830) was a leading English portrait painter and president of the Royal Academy.
Lawrence was a child prodigy. He was born in Bristol and began drawing in Devizes, where his father was an innkeeper. At the age of ten, having moved to Bath, he was supporting his family with his pastel portraits. At eighteen he went to London and soon established his reputation as a portrait painter in oils, receiving his first royal commission, a portrait of Queen Charlotte, in 1790. He stayed at the top of his profession until his death, aged 60, in 1830. Self-taught, he was a brilliant draughtsman and known for his gift of capturing a likeness, as well as his virtuoso handling of paint. He became an associate of the Royal Academy in 1791, a full member in 1794, and president in 1820. In 1810 he acquired the generous patronage of the Prince Regent, was sent abroad to paint portraits of allied leaders for the Waterloo chamber at Windsor Castle, and is particularly remembered as the Romantic portraitist of the Regency. Lawrence's love affairs were not happy (his tortuous relationships with Sally and Maria Siddons became the subject of several books) and, in spite of his success, he spent most of life deep in debt. He never married. At his death, Lawrence was the most fashionable portrait painter in Europe. His reputation waned during Victorian times, but has been partially restored in more recent ones.