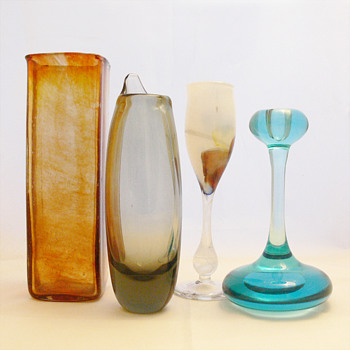 This four items designed by Per Lütken were a few of Carlos's presents for our 2nd anniversary last September 16th.

The tall one on the left is an almost 30 cm tall LAVA vase... amazing!

The grey one was designed in the 1950s but it has no name. I have got a simmilar smaller one in the SØGRØN shade of green (http://www.collectorsweekly.com/stories/88938-sgrn-sea-green-coloured-items-per?in=collection-2111).

The next one is a 25 cm tall vase/champagne glass from the CASCADE series.

The turquoise candleholder seems to belong to the LAGUNEBLAA series, or at least it's made in te same colour. I believe this is the rarest of the four. It is marked 2 on the base, so it's supposed to be a second piece but... there is nothing wrong about it, at least nothing that could make it descend into that second glass range.

The funny thing about it is that being a LAGUNEBLAA candleholder the design is totally different and look more like the smaller ones made for the AKVA range (http://www.collectorsweekly.com/stories/89088-akva-candleholders-per-ltken-holmega).

In any case, it doesn't appear in any catalogue nor in Lütken's black notebook of rare glass.