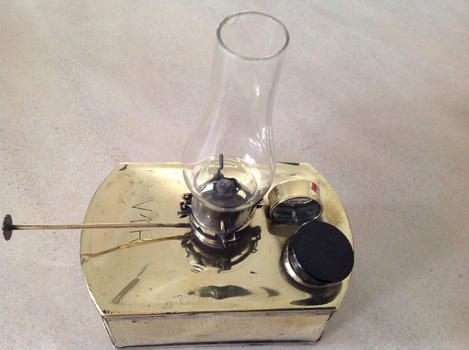 I purchased this lamp at an auction the other day, I paid $60 for it and have no idea if it was even worth that much, but I love it so I bid until I got it. I know nothing of its history. It has V R (with the arrow between the two letters) on the top of the base, also markings around the brass that holds the glass in but I can't read it, maybe one bit says ERWOOD. It's about 160mm long and 100mm wide, to the top of the glass it's 200mm high. It's brass, the joints are soldered but it looks like the original solder. It's a nice clean piece, maybe to clean. Can anyone tell me anything about this lamp. Thanks. I've been advised the V Arrow R may not be Vic Rail it may be Queen Victoria. I have been in touch with someone from the ARHS Vic Division who said pretty much all things government in the 19th century was "Queen and Country" my words not his, so lots of government property was marked with the V Arrow R. He said it may have been rail though not necessarily from Victoria, but it could also have been military or police.