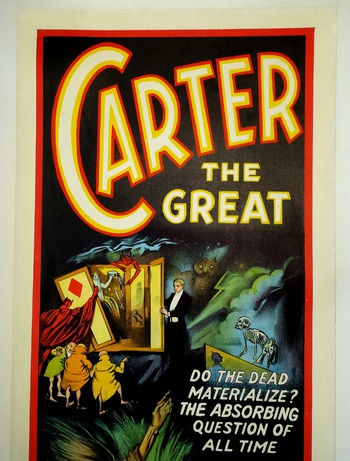 This is an original 1926 Carter The Great stone lithograph from my private collection of Magic posters. This poster has 2 names, often called the "Delphi" Panel Poster (Do to its panel size of approximately 14" x 41") or sometimes referred to as, "Do the Dead Materialize". It is a smaller (And much more rare) version of the 3-sheet sized poster of a similar manor.

This striking and eerie image is one of my favorite posters from the Golden Age of Magic and has taken me many years to finally locate one! This scarce poster is nothing less than SPECTACULAR! It is in "A" condition and is filled with incredible art work consisting of various illusions and devious creatures from the underworld! This incredible poster speaks for itself.

Charles Joseph Carter (Carter The Great) was a lawyer, editor, boy wizard, and businessman. He began his career in entertainment as a solo performer on a medicine show, and evolved into a globetrotting illusionist. Decades of touring brought him great wealth and these spectacular theatrical advertising lithographs helped draw hundreds of thousands of theatre patrons to his shows.