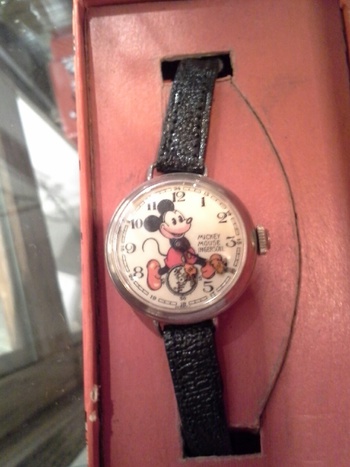 1936 English ingersoll Mickey #2, the "bearded" Mickey, in my
opinion the prettiest, most desirable of them all. The American Mickeys
used an existing Ingersoll watch, the "Mite-deluxe" for the initial run of
their wrist watches, the watch was modified to create the new design and
premiered at the 1933 Chicago Worlds Fair where a small factory was set
up and you could order your Mickey and watch as it was assembled on site
for presentation to you, whereas the English Mickeys were manufactured
in Ruhla Germany, and marked as foreign on the dial and sold in the
United Kingdom from 1934 until production ceased to focus on munitions
production leading up to WWII. Because of the short production period
and the Depression, it has been estimated that less than 10,000 were ever
produced while in the U.S. It is said that Macy's dept. store in NY sold
11,000 the first day they were offered.