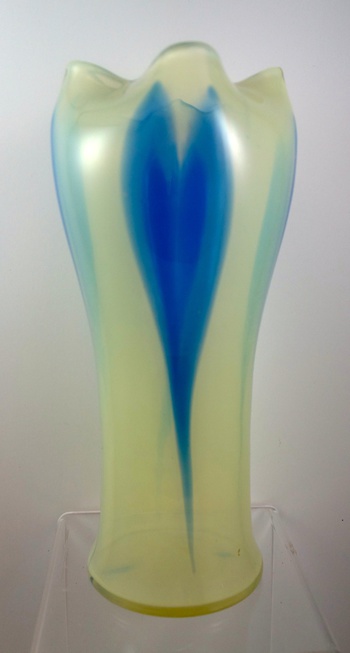 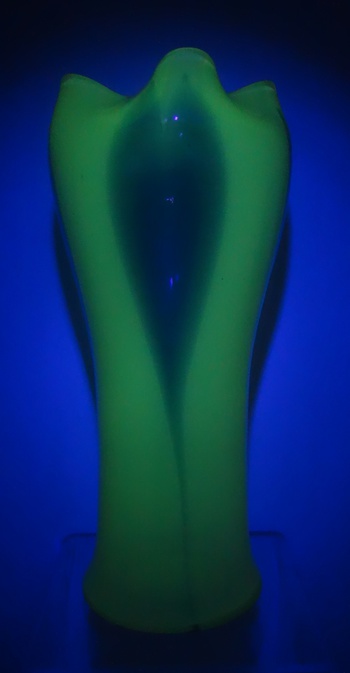 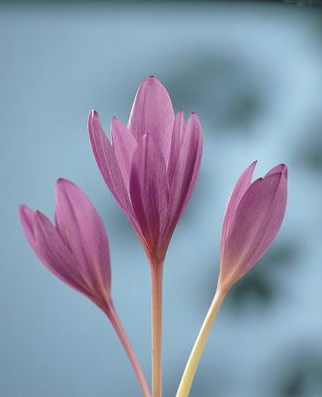 When Lötz Böhmisches Glas, 1880-1940 (the “Loetz Bible” to collectors) was published in 1989 (way before I started collecting glass), it began to crystallize for many collectors a picture of what is, and what is not, Loetz production. Band 2 in particular (with its line drawings and notations on each form) gave colors, décor names, and production numbers (as defined by the factory) for each pattern. The Glasmuseum Passauer, with its expansive collection of Bohemian glass by Loetz and numerous other makers, provided context for the information contained in the Loetz Bible by way of real examples of nearly every known décor. However, within those pages there are colors and décors listed that collectors and researchers (at the time) either hadn’t seen, or hadn’t connected to pieces in their experience. In the last quarter century, some of those unknown décors have been identified and published (Campanula, Coppelia, Medina, Oceanik, and most recently, Mimosa), while others remained a mystery (Terresta, Lucifer, Isis, and Calliope, to name a few). Still, the paper patterns produced in Band 2 only represented about 5 to 10 percent of the total patterns on record.

Then, in 2011, Jitka Lnenickova’s massive Loetz/Series II, Paper Patterns for Glass from 1900 to 1914, Part 1, was published. This book provided images of the remaining Series II patterns (excluding special commissions), and provided even more information about each pattern, painstakingly done by extracting information from archived company invoices. Not surprisingly, in addition to thousands of new shapes, it also contained enticing references to even more previously un-catalogued décors.

I acquired the vase photographed here online from a seller in the UK. In addition to the vase's striking beauty, its shape captured my attention. It seemed very Loetz-like to me, although I did consider other makers as well. I conferred with some of my collector friends, and we remarked that the blue pulled decoration bore a resemblance to the décor we generally refer to as “Crocus”, attributed informally to Kralik, but even that attribution is tentative. In fact, from the time I began e-mailing friends about this vase, I referred to it as “Blue Crocus” in the subject line. As it turns out, I couldn’t have picked a much better name.

Alfredo Villanueva remarked that the shape was nearly identical to his gorgeous orange opal vase (Prod Nr. II-2707), published recently here on CW. However, my vase, at 9” tall, is shorter than his by about a half inch to an inch (outside what could be considered a standard deviation). I decided to go to the big book. Using the year of production for Alfredo’s vase (1905) as the jump-off point, I began browsing shapes in Loetz Series II until, in short order, I found Production Number II-2110. This is a shape that was not published in the Loetz Bible. The shape profile matched, the size matched (230mm=9.0 inches), and also, included in the notes - a new décor name, also previously unpublished: Colchicum, and a possible variation, Colchicum Blau!

As it turns out, Colchicum is the genus of a flower that very closely resembles the true Crocus, except that this flower blooms in the fall, hence its nickname, the “Autumn Crocus”. Colchicum Blau = Blue Colchicum, or Blue “Autumn Crocus”! Excited by this discovery, I looked for other shapes, and found other references. Prod. Nr. II-2112, a vase, lists “Colchicum heliotrop” (also a Loetz-defined shade of blue) , Prod. Nr. II-2123, a vase, lists Colchicum (thea mit blau), and II-2124, a lamp shade, lists Colchicum Blau. The line drawings for the latter two even indicate the outline of the pulled flower petals.

I am unclear whether the various iterations of the décor name in the paper pattern drawings refer to variations, or if they are referring to the same (one) décor. The ground of my vase does appear to be Thea, which is a very pale yellow, according to the Loetz Bible, and the flowers are clearly a solid “blau” or blue. The yellow portion is also highly UV reactive, or, like a certain red-nosed reindeer - “...you could even say it glows!”

P.S. - special thanks to Alfredo Villanueva, David Littlefield, Andy Jelcic, Alisa Piedmont, Brian Severn, and Mike Moir for being sounding boards and offering their opinions while this mystery was being unraveled!