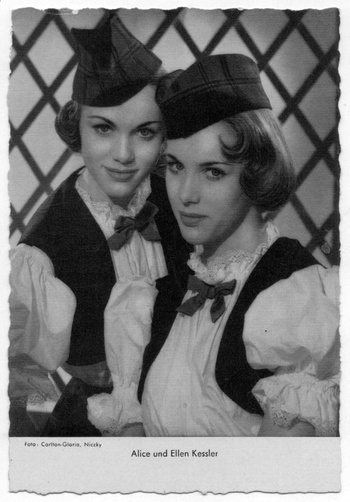 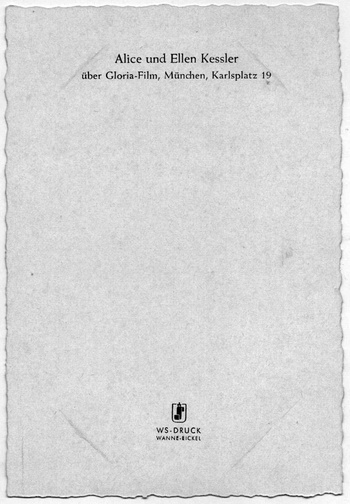 This is a black & white photocard of Alice and Ellen Kessler - Circa 1950's ** Alice and Ellen Kessler (born 20 August 1936 in Nerchau, Germany) are popular twins in Europe, especially Germany and Italy, from the 1950s and 1960s and until today for their singing, dancing, and acting. They are usually credited as the Kessler Twins (Die Kessler-Zwillinge in Germany and Le Gemelle Kessler in Italy), and remain popular today. In the USA, they were not as popular but appeared in the 1963 film Sodom and Gomorrah as dancers and appeared on the cover of Life Magazine in that year. In 1966 they performed on The Danny Kaye Show. -- Their parents sent them to ballet classes at the age of six, and they joined the Leipzig Opera's child ballet program at age 11. When they were 18, their parents used a visitor's visa to escape to West Germany, where they performed at the Palladium in Düsseldorf. They performed at The Lido in Paris between 1955 and 1960, and represented West Germany in the 1959 Eurovision Song Contest, finishing in 8th place with Heute Abend wollen wir tanzen geh'n (Tonight we want to go dancing). They moved to Italy in 1960 and gradually moved to more serious roles. At the age of 40, they agreed to pose on the cover of the Italian edition of Playboy. They moved back to Germany in 1986 and currently live in Munich. They have received two awards from both the German and Italian governments for promoting German-Italian cooperation through their work in show business.
** Source for above - wikipedia
Photo by: Carlton-Gloria, Niczky
On the reverse is the description:
Alice und Ellen Kessler
uber Gloria-Film, Munchen, Karlsplatz 19
Card printed by: WS-Druck - Wanne-Eickel