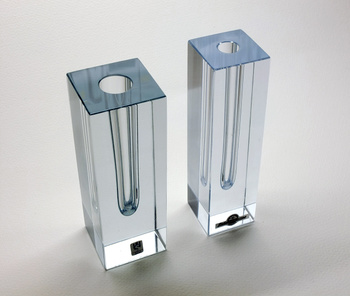 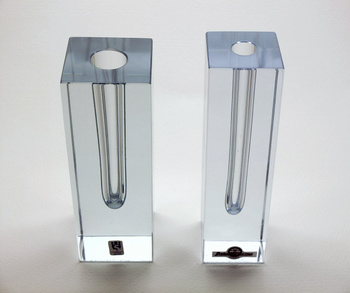 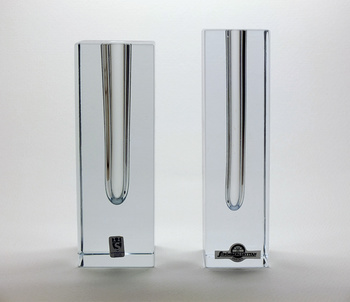 I have also seen a higher model in Sveriges Glasmuséum - Kulturparken Smaland. Probably produced in the 1960s. You could also get the model with different colored underlays (sommerso). Asta Strömberg tell us she want to give the glass clean and simple lines. This vase model is an excellent example of her philosophy.

You can see that the two vases I show here have a little different crystal tint. One is slightly darker, but both have a weak blue nuance, not so characteristic typical as usual for Strömbergshyttan trough the years. Maybe it's depending on experiments with new crystal melts? Orrefors wanted to come away from this typical slightly blue crystal, called "specialkristall" in swedish, and introduced clearer crystal and also a darker smoke gray glass. The old blue crystal from Strömbergshyttan was probably the result of engaging Edward and Gerda Strömbergs son, Erik Strömberg, in 1936. He worked for Kosta and Åfors, but after marrying Asta 1936, he was engaged for Strömbergshyttan. He was a skilled engineering and was constantly working with technical improvements in production. Personally I like this blue "special crystal" better than the more neutral ones. It brings out the shape of the glass in a better way in my opinion. Strömbergshyttan glass lost its soul and glory produced in clear crystal. But the leadership in Orrefors did not like the bluish crystal and described it as unsalable. But the "problems" was on a higher level I think. The new glass melts introduced by Orrefors in Strömbergshyttan sold apparently not too good either...