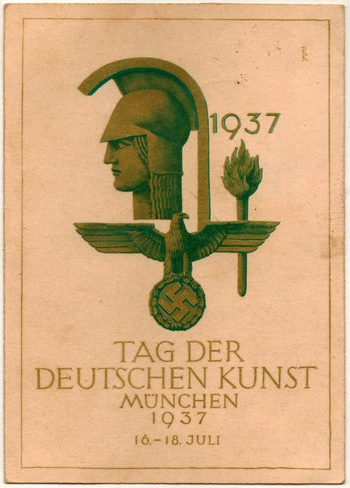 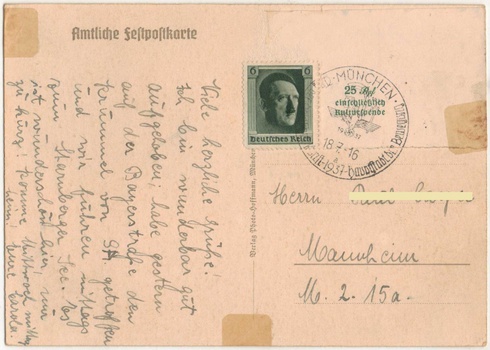 This is a personal family postcard sent from my grandmother to my grandfather (they resided in Mannheim Germany) in 1937.
Topic: TAG DER DEUTSCHEN KUNST - MUNCHEN Juli 16-18, 1937
(Day of German Art Exhibition - Munich July 16-18, 1937)
The front bears the famous Richard Klein art logo. - The original art exhibition hall in Munich, The Glaspalast, burned to the ground on June 6, 1931 and when Hitler came to power in January 1933, one of his principal objectives was to replace it. Using architect Paul Ludwig Troost, Hitler erected one of his great Nazi buildings, the "Haus der Deutschen Kunst" (House of German Art). The building became the venue for the greatest German Art Shows in history when it was officially opened summer of 1937.
REVERSE: Amtilche festpostkarte (Official Proof Postcard)
PRINTER: Verlag - Photo-Hoffman, Munchen (address covered by stamp)
MESSAGE: Difficult to decipher my grandmothers handwriting but the message is to this effect: "Many warm greetings! I am wonderfully well-cared for". (she met someone, a friend possibly, in Bayern to attend the exhibition with, and they had lunch together). "This is wonderful here, already too short for me!" "I am coming home (tomorrow?) afternoon." "Love, Carola" - sent to my grandfather (name blotted) in Mannheim.
POSTAGE STAMP: The stamp is Scott# B104 (semi-postal) - 6 pfennig
- the stamp was issued in three different formats in June 1937 and was to commemorate Hitler's 48th birthday. - This is a "single" of the format that was sold in sheets of four, inscribed in the margin beside each stamp "25 Rpf. einschliesslich Kulterspende" - (including Cultural Donation) in 3 lines in green ink. The sheets were rouletted to allow each stamp to be seperated with the component label.
POSTMARK: The postmark is the special Day of German Art Exhibition mark and bears the Richard Klein art logo (from the front) and is dated July 16-18, 1937 MUNCHEN 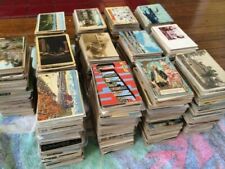