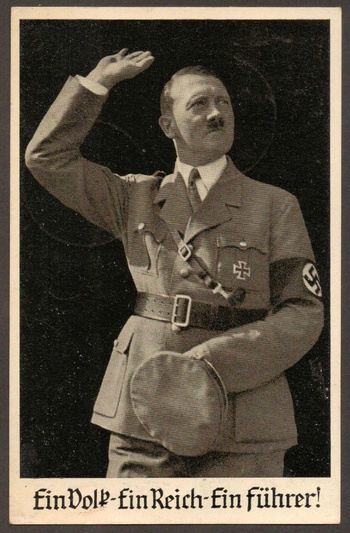 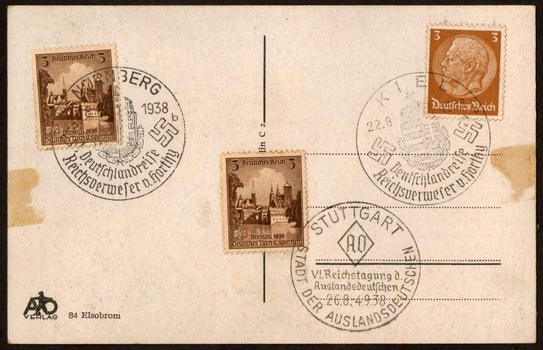 This is a Adolph Hitler Photographic stamped postal card with three different postmarks and no address or message. The black & white photo image is captioned with "Ein Volk, Ein Reich, Ein Fuhrer"
- (One People, One Empire, One Leader)
--
POSTAGE STAMP A : German - Scott# 416 / 3 pfennig / Regular Issue
from 1934 depicting President Hindenburg / light Brown
POSTMARK A : Deutschlandreise Reichsverweser v. Horthy / KIEL 22.8.1938
(German Travel Regent von Horthy) - August 22, 1938
POSTAGE STAMP B : German - Scott# 486 / 3 pfennig / Commemorative
Topic - "Cathedral Island - Breslau" - Dark Brown
- (A series of four different stamp images of Breslau were issued on June 21, 1938 to commemorate the 16th German Gymnastics and Sports Festival to be held in Breslau from July 23-31, 1938)
POSTMARK B: Deutschlandreise Reichsverweser v. Horthy / NURNBERG 22.8.1938 (German Travel Regent von Horthy) - August 22, 1938
POSTAGE STAMP C : German - Scott# 486 / 3 pfennig / Commemorative
Topic - "Cathedral Island - Breslau" - Dark Brown (same as B above)
POSTMARK C : The postmark is the special Stadt der Auslanddeutschen Nazi Congress mark and is dated 26.8.-4.9. 1938 STUTTGART
VI. REICHSTAGUNG DER AUSLANDSDEUTSCHEN
(6th Nazi Congress Foreign Organization- Stuttgart Aug. 26-Sept. 4, 1938)
** Re: POSTMARKS A & B - KIEL & NURNBERG
** Source New York Times Aug. 22, 1938
KIEL The scheduled meeting here today [Aug. 22] of Chancellor Hitler and Regent Admiral (Milkolos) Horthy of Hungary was made the occasion both for a demonstration in the bulk of the new German sea power and for the proclamation, by implication, of a Nazi-led crusade of states of Central and Eastern Europe against the “Bolshevik menace” from Moscow. In a sense, the developments of the day stressed the prospective role of the Third Reich as heir, in influence at least, to the empire of the Hapsburgs. The display began this afternoon twenty-five miles off Kiel with the Fuehrer and his Hungarian guest taking the salute as 117 of the new fleet steamed past the Grille in line. The procession was led by the trim 26,000-ton Gneisenau.
** Source New York Times Aug. 26, 1938
BERLIN, Aug. 25.-The flower of the new German Army was paraded before Admiral Nicholas Horthy, Regent of Hungary, and his Ministers today. It was largely a mechanized display, although the infantry and cavalry – picked men all of them – formed a part of it. Especially notable in the cavalry ranks was a bugle corps that played excellently, the men guiding the horses with their knees. That appeals to horsemen like the Hungarians. In all, 16,000 infantrymen, 750 cavalrymen, 690 motor vehicles, 412 tanks and armored cars, 318 motor cycles, 300 guns and 72 horse-drawn vehicles passed before the Regent and Chancellor Hitler. The morning military parade was the chief feature of Admiral Horthy’s day, Tomorrow the guests will visit Potsdam, breakfasting with Foreign Minister Joachim von Ribbentrop at Charlottenburger Palace, once the home of the German Kaiser. In the afternoon they are to be the guests of the Goerings at their forest home. Thence they will take their special train for a brief visit to NUREMBERG and return home.