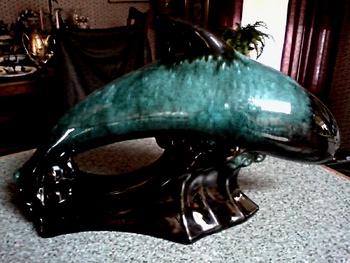 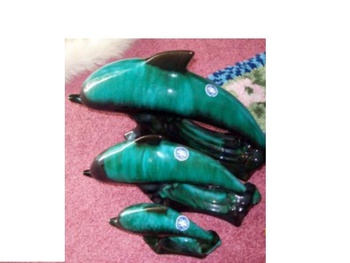 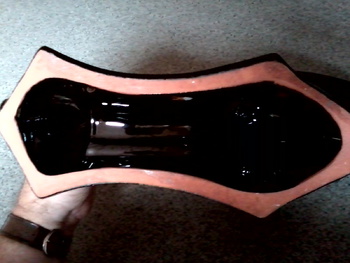 Found this wonderful large Dolphin figure at GW today.Thought it had a nice retro feel to it. He does have a small chip in his nose that someone touched up with marker. It's 17" long and comes from the Blue Mountain Pottery in Ontario Canada. The red clay is a dead give away as Poole Pottery in England made almost the same dolphins, but their clay is white. Interesting by itself, this pottery was created by Czechoslovakian Jozo Weider as a means of financing his dream to develop a ski area near Collingwood in the Blue Mountains of Ontario in the late 1940's They started business in the early 50's and closed in 2004. The round blue paper label is missing but I found plenty online to ID this piece. Turns out to be quite collectible and they even have a BMP collectors club website. -Mike-

Blue Mountain Pottery began in the early 1950s, likely 1953, and continued to produce its wares until 2004, terminating business in February 2005. During this time it grew from a small localized operation based at the Blue Mountain ski resort just outside Collingwood into a major factory exporting to the United States, British Isles, Caribbean, Australasia and other markets.

Items made over this period can be identified by studying the diverse methods of marking the pottery using different ink stamps, mould marks, stickers, hangtags and glazes. Blue Mountain Pottery is best known in the traditional green glaze, a flowing drip glaze that made each piece a distinctive individual work of art. However, as many as thirty to forty other glazes may have been employed at various times in the company's history including various hues of blue, red, mocha, slate, yellow/brown ("harvest gold"), white, black and many, many more.