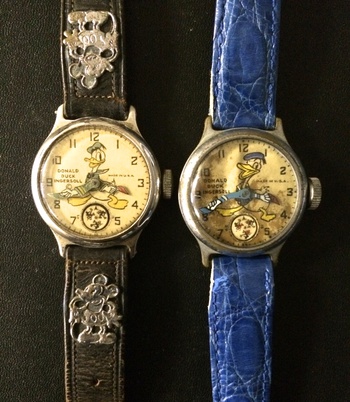 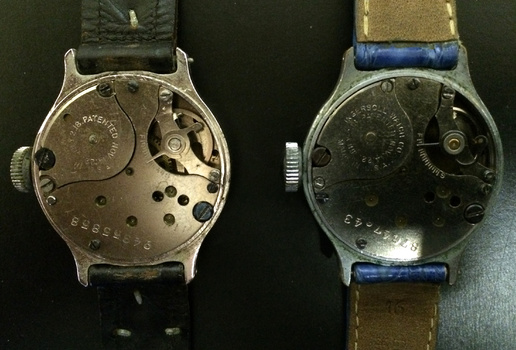 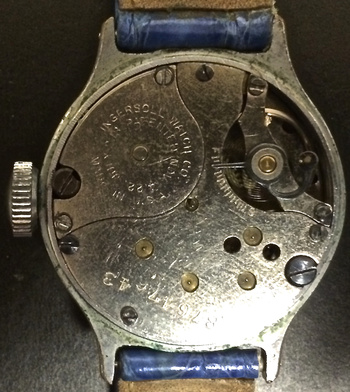 I am hoping someone can help me clear up a mystery about an item I found. I have two Donald Duck watches by Ingersoll in my collection. See photo. The one on the left I identified as the 1935 Donald Duck Ingersoll wrist watch, which I understand is extremely rare.

But then I found the one on the right, which, if you look closely, appears to be an earlier version of Donald Duck. I could not find any information about Ingersoll releasing an earlier version of this watch. By all accounts, the one on the left is the earliest version I could find. However, I did read that after the success of the Mickey watches, Ingersoll had considered making other characters and some of those earlier watches never went into production.

Is it possible that I have an early Donald Duck watch that never went into production? Or am I way off-base? Hopefully someone out there can shed some light on this mystery. Thanks.
-------
Thanks for the feedback so far. As suggested, I opened up the back of both watches and put them side by side so that you can compare the movements, etc. Again, the one on the left is the standard issue watch and the one on the right is the mystery watch. I also posted a close-up of the inside of the mystery watch by itself. They both show the same patent information stamped on the inside. The mystery watch also has an extra line of text around the patent info that reads "Ingersoll Watch Co. Made in U.S.A.". They are both stamped with a unique 8-digit number. Otherwise, the insides look identical.