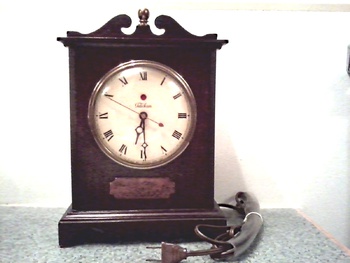 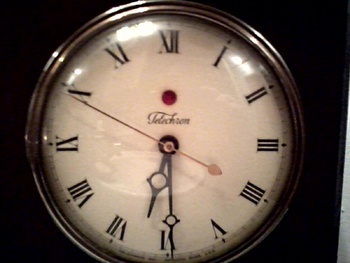 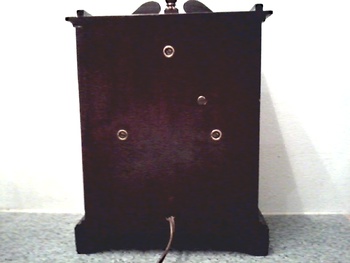 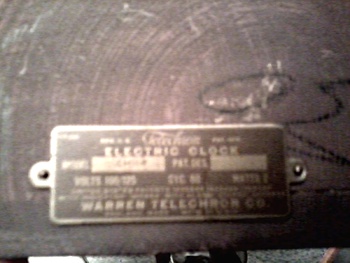 Found this great early electric mantel clock made by the Warren Telechron Co. of Ashland Mass.. I believe it's mahogany with a little burl walnut panel under the dial. They have been in business since 1917. In 1954 they merged with GE and produced clocks under Telechron /GE. This clock is from their war years period 1939-1944. Model 4H99 "The Knickerbocker"advertised as "For the early American home, this clock will add dignity and beauty." There is a metal tag on the bottom with all the companies patent info, model numbers etc. The finial on mine has a ball style. This type was used on one of their other models but doesn't match the picture on their website for this particular clock. The finial shown is an urn type so maybe it was replaced at sometime or was just an option for either one. Works great but I'm not sure if the cord has been replaced or not. It looks kind of new (60's 70's) to me. -Mike-

Courtesy of "Telechron .net" www.telechron.net
The War Years 1939 -1944
Telechron felt the pinch. The exotic hardwoods (Prima Vera wood, zebrawood, harewood, ebony, Burma Padouk, lacewood, satinwood--they spared no expense) imported in the 30's were replaced by domestic woods, facsimile leather and plastic.
Nickeled brass rotor cases were now copper. Brass hardware was replaced with steel. Steel was replaced with nothing at all. To save steel, bells were left off alarm clocks since the buzzer arm alone made for a powerful, if not melic, wakeup call. Clock cases made of steel were largely replaced by bakelite. Even bakelite got replaced when Telechron began using wood fiber in their commercial clock cases.
For me, the most notable thing about the clocks of this era was how much their quality didn't suffer because of shortages. Any one of these clocks is better than what the company was turning out 15 years later and I don't just mean their style (of which they had plenty). They used unmeltable bakelite instead of plaskon. Behind glass--not plastic--crystals, were steel dials instead of foil or paper. They had brass or steelworks instead of plastic, aluminum or worse. It was a time when quality, even at a time of national emergency, still mattered and Telechron delivered.