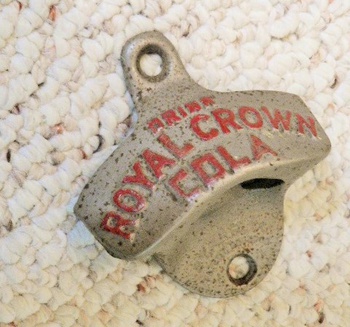 Metal RC Royal Crown Cola bottle opener, found many years ago and stored in the attic area that I am finally getting around to digging into. Very hot cramped attic and now with cooler weather can go up and bring down.
Those days were interesting days
In the 40's and 50's there were a few abandoned gravel pits where people would dump mostly hardware type items. Located mostly outside city limits which was covered with brush and prickley pear. I would go around with a wagon and pick up metal items to take to the scrap pile at my grade school to support the war effort.
Items like metal wheels, bike parts, hardware items , paper items books, toys,magazines, bottles, huge catalogs, old letters with stamps,old phonograph records (some about 15-16 inches in diameter) were some of the items that were found .
Some things could be used or traded. The telephone company would dump telephone items also.
The police once brought out a bunch of pinball machines and I guess gambling machines and burned them. My brothers and went and dug thru ashes and found copper wire and Silver Coins in the ashes.
I know where there is a small gravel pit that contains a lot of automotive parts, bottles household items that is now under a home or in their back yard S.E. of the city.
In those days the city dump was not off limits to residents who wanted to would salvage stuff. It was not even covered up until houses were being built in the area.
Now there is a huge mound called Mt. Trashmore where garbage was buried in the 60's