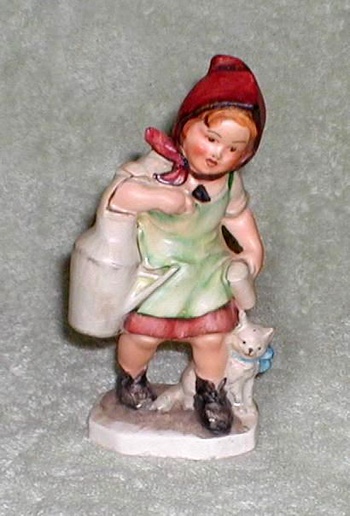 This is FRIEDEL porcelain figurine called "Milk Maid with Kitten" - It is about 5 1/2" and is stamped in green on the bottom Friedel Bavaria, hand-painted, Made in Western Germany / circa late 1950's.
Annemarie Friedel was born 1907 in Bayreuth, Germany. She attended the art academy in Munich. After a stay in Stuttgart she moved to Dresden where she worked until the end of the Second World War. During the poor post-war period she manufactured figurines of angels for enjoyment and sometimes also as objects for bartering for milk and bread. In 1952, she presented her angel figurines for the first time at the trade fair at Dornbirn, Austria, followed by successive exhibitions in Nuremberg and Frankfurt and hence a profession was created from a hobby. She passed away in 1986.

ANTIQUE CUPID AND HIS LOVER FIGURIN...
$146
See all