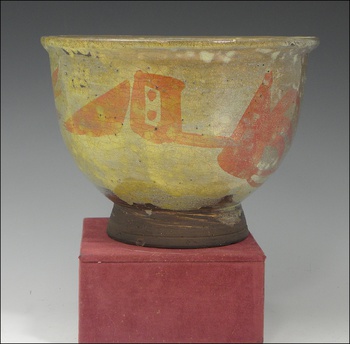 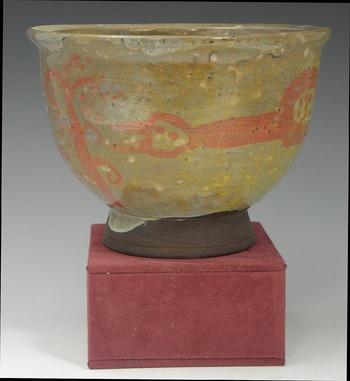 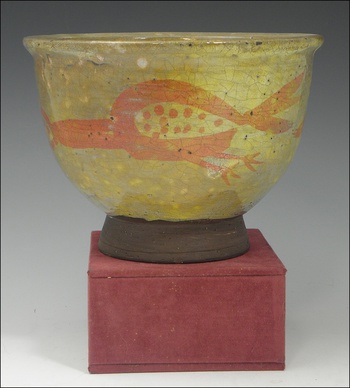 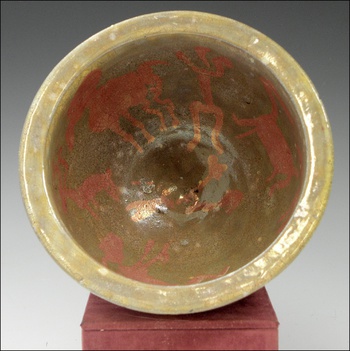 I purchased this pot over 20 years ago in New York City. I didn't know anything about the potter, Fred Farr - just that this bowl (5"tall by 6.5" widest and dated 1949) really appealed to me. I loved:

* The "pterodactyl/prehistoric decoration" with iridized finish on the outside - a finish like an ancient Roman beaker that has become iridescent after centuries in the soil
* The "crudely constructed", gritty stoneware body with crazed and mottled surface
* The strange creatures, like the ancient drawings on the Chauvet cave in France, that inhabit the bowl's inside surface.

Recently I learned a little about Fred Farr, or more correctly about a gallery in Manhattan with which he was associated.

The Stable Gallery, originally located in an old livery stable on West 58th Street in New York City, was founded in 1953 by Eleanor Ward. By the mid 1950s the Stable Gallery would begin to annually host an exhibit that would bring forth notable Abstract Expressionist artists including Willem de Kooning, Jackson Pollock and Andy Warhol to show their works. This yearly event, which would come to be known as the "Stable Annual", was a great success for the gallery. The Stable Annuals represented what came to be known as the “New York School of Abstract Expressionists of the 1950s”.

It's interesting to think that this little pot, years and years ago, may have had a Pollock or Warhol behind it. Today those paintings are likely in the homes of billionaires with household names, while this little forgotten bowl, by a forgotten artist, adornes my humble abode.

Beauty certainly is in the eye of the beholder and I enjoy this bowl . . . and its story, as much as any piece of art.