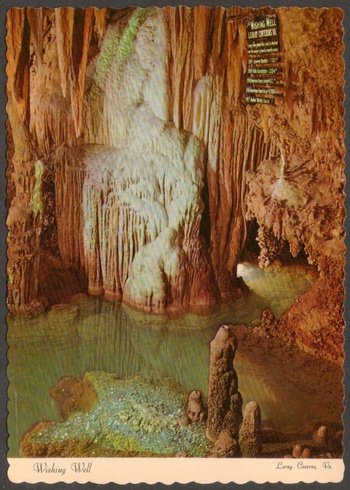 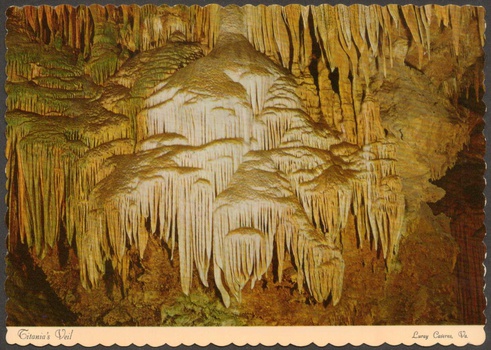 These are two unused postcards from Luray Caverns, Virginia - 1976
The first is the "Wishing Well" - Visitors from all over the world toss 2 million coins into the Wishing Well, every few years the well is drained and its contents given to a National Health organization. Card# 69510-C
The second is "Titania's Veil" - Here beneath the earth's crust are scenes of awe-inspiring beauty. Card# 69515-C -- Both cards Published by Luray Manufacturing & Distributing Co., Luray, VA - Made by Dexter Press, West Nyack, New York.
*** Luray Caverns, originally called Luray Cave, is a large, celebrated commercial cave just west of Luray, Virginia, USA, which has drawn many visitors since its discovery in 1878. The underground cavern system is generously adorned with speleothems (columns, mud flows, stalactites, stalagmites, flowstone, mirrored pools, etc.). The caverns are perhaps best known for the Great Stalacpipe Organ, a lithophone made from solenoid fired strikers that tap stalactites of various sizes to produce tones similar to those of xylophones, tuning forks, or bells. The Caverns are situated in the Shenandoah Valley just to the east of the Allegheny Range of the Appalachian Mountains in Luray, Virginia. The Valley extends from the Blue Ridge in the north to the south end of Massanutten Mountain. Cave Hill, 927 feet (283 m) above sea level, had long been an object of local interest on account of its pits and oval hollows or sinkholes (known as karst) through one of which the discoverers of Luray Caverns entered. Luray Caverns does not date beyond the Tertiary period, though carved from the Silurian limestone. At some period, niches and already formed chambers were completely filled with water, highly charged with acid, which then slowly began to eat away at much of the softer material composing much of the walls, ceilings and floors. In 1974, the National Park Service and the Department of Interior designated Luray Caverns as a National Natural Landmark. *** Source - wikipedia