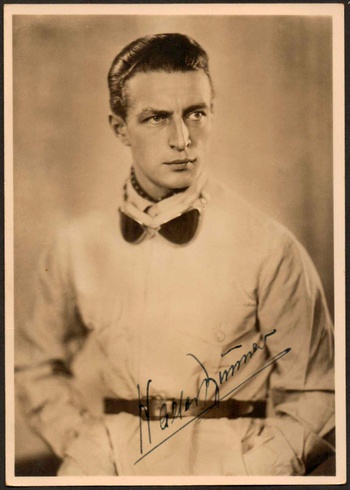 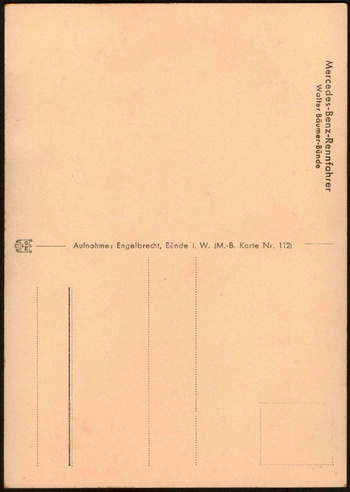 - 1938 German photo postcard for the Mercedes-Benz Racing Team
- unused, autographed photo card / Walter Baumer-Bunde - Race Driver
- Aufnahme by Engelbrecht Bunde I.W. (Mercedes-Benz Karte Nr. 112)
*** Walter Baumer-Bunde (1908-1941) -- After a Mercedes-Benz test drive he was made reserve driver for the Mercedes-Benz Grand Prix Team. He drove the Mercedes-Benz W125 GP car during practice for the 1937 German Grand Prix. In 1938 he raced the car but retired on lap 15 with engine trouble. In the Swiss GP he finished 10th. In the non-Championship Donnington GP he took over Caracciola's car, but when came in to refuel after 43 laps, the car was damaged when it caught fire. In the 1939 Belgrade GP he crashed on lap 17. World War II intervened and he was never able to show his true potential. During the summer of 1941, he died in a private (non-racing) auto accident in occupied France when he was kissed by a female companion while driving and distracted, crashed into a pole.