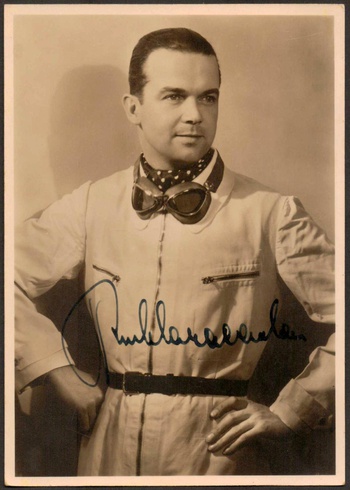 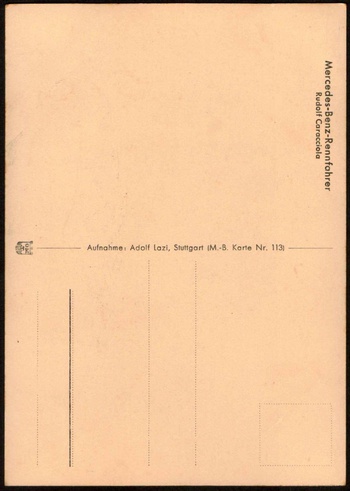 - 1938 German photo postcard for the Mercedes-Benz Racing Team
-- unused, autographed photo card / Rudolf Caracciola - Race Driver
- Aufnahme by Adolf Lazi - Stuttgart (Mercedes-Benz Karte Nr. 113)
*** Otto Wilhelm Rudolf Caracciola (1901-1959), more commonly Rudolf Caracciola, was a racing driver from Remagen, Germany. He won the European Drivers' Championship, the pre-1950 equivalent of the modern Formula One World Championship, an unsurpassed three times. He also won the European Hillclimbing Championship three times – twice in sports cars, and once in Grand Prix cars. Caracciola raced for Mercedes-Benz during their original dominating Silver Arrows period, named after the silver colour of the cars, and set speed records for the firm. He was affectionately dubbed Caratsch by the German public. in 1935, 1937 and 1938. Like most German racing drivers in the 1930s, Caracciola was a member of the Nazi paramilitary group National Socialist Motor Corps (NSKK), but never a member of the Nazi Party. He returned to racing after the Second World War, but crashed in qualifying for the 1946 Indianapolis 500. A second comeback in 1952 was halted by another crash, in a sports car race in Switzerland. After he retired Caracciola worked as a Mercedes-Benz salesman targeting North Atlantic Treaty Organization (NATO) troops stationed in Europe. He died in the German city of Kassel, and was buried in Switzerland, where he had lived since the early 1930s. He is remembered as one of the greatest pre-1939 Grand Prix drivers, a perfectionist who excelled in all conditions. His record of six German Grand Prix wins remains unbeaten.