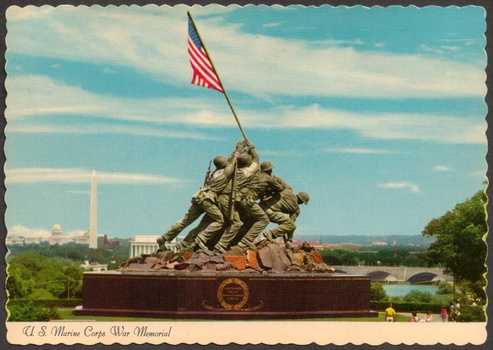 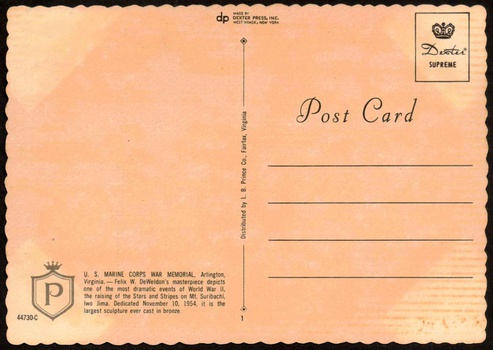 This is an un-used 1976 postcard of the U.S. Marine Corps War Memorial, Arlington, Virginia -- The card is number 44730-C by Dexter Press, Inc., West Nyack, NY - distributed by L.B. Prince Co., Fairfax, Virginia.
*** The Marine Corps War Memorial (also called the Iwo Jima Memorial) is a military memorial statue outside the walls of the Arlington National Cemetery in Arlington Ridge Park, Arlington, Virginia, in the United States. The memorial is dedicated to all personnel of the United States Marine Corps who have died in the defense of their country since 1775. The memorial features the six men who raised the second flag over Iwo Jima: Sergeant Michael Strank, Corporal Harlon Block, Private First Class Franklin Sousley, Private First Class Rene Gagnon, Private First Class Ira Hayes, and Hospital Corpsman John Bradley. The design of the massive sculpture by Felix de Weldon was based on the iconic photograph of the raising of the second flag during the Battle of Iwo Jima by Associated Press photographer Joe Rosenthal. Upon first seeing the photograph in 1945, de Weldon created his maquette for the sculpture, a wax model of the image, during a single weekend. It was presented at Congress to encourage funding.
In 1951, work commenced on creating a commissioned, cast bronze memorial based on the photograph, with the figures 32 feet (9.8 m) tall and the flagpole 60 feet (18 m) long. The granite base of the memorial bears two inscriptions:
"In honor and memory of the men of the United States Marine Corps who have given their lives to their country since November 10, 1775"
"Uncommon Valor Was a Common Virtue" (a tribute by Admiral Chester Nimitz to the fighting men on Iwo Jima)
The location and date of every major United States Marine Corps engagement up to the present are inscribed around the base of the memorial. The base is made entirely in the deep black diabase of Lönsboda, a small town and a granite quarry in the southernmost province of Sweden.
The official dedication of the memorial by President Dwight D. Eisenhower occurred on November 10, 1954, the 179th anniversary of the Marine Corps. In 1961, President John F. Kennedy issued a proclamation that a Flag of the United States should fly from the memorial 24 hours a day, one of the few official sites where this is required.
*** Source - wikipedia 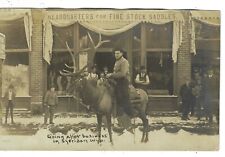 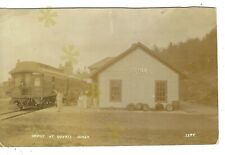 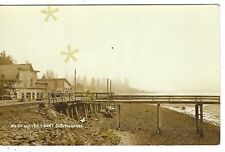 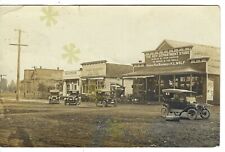