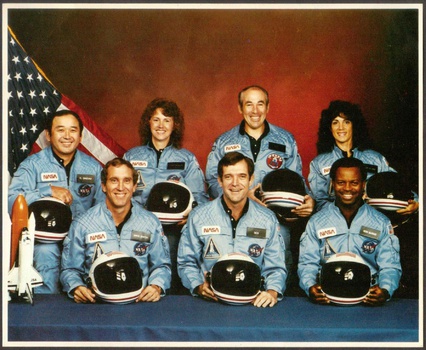 This is a 4 3/4" by 5 3/4" photograph of the Space Shuttle Challenger crew that perished in the Challenger explosion of Jan. 28, 1986.
-- Space Shuttle Challenger (NASA Orbiter Vehicle Designation: OV-099) was NASA's second Space Shuttle orbiter to be put into service, Columbia having been the first. Its maiden flight was on April 4, 1983, and it completed nine missions before breaking apart 73 seconds after the launch of its tenth mission, STS-51-L on January 28, 1986, resulting in the death of all seven crew members. It was the first of two shuttles (the other being Columbia) to be destroyed.
The crew members were:
Francis R. Scobee – Mission Commander
Michael J. Smith – Pilot
Ellison S. Onizuka – Mission Specialist 1
Judith A. Resnik – Mission Specialist 2
Ronald E. McNair – Mission Specialist 3
Christa McAuliffe – Payload Specialist 1, Teacher in space
Gregory B. Jarvis – Payload Specialist 2