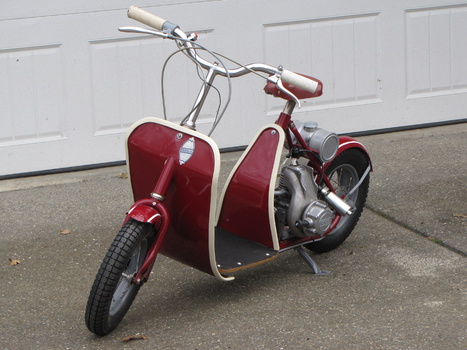 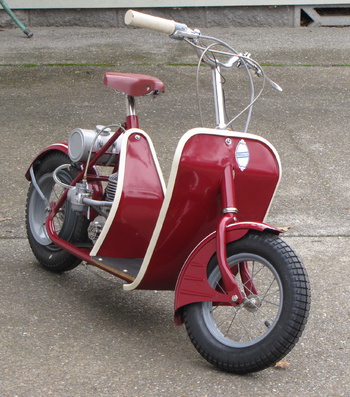 The Pranafa Playboy Mini-Scooters were built by a Dr. Seiffert in Frankfurt, Germany during the 1950’s. They first appeared at the Frankfurt Messe Zweirad (“Two-Wheeler Fair”), the forerunner of the IMFA in Cologne. Dr. Seiffert announced proudly at the Fair that this scooter is the ideal transportation to the office; a scooter you could park next to your desk. These now very rare scooters were imported by Hap Alzina, owner of a BSA Dealership in Oakland, California.

The engines were not manufactured by Dr. Seiffert, but were built by the famous engine manufacturer Richard Kuchen from Inglostadt, a city in Bavaria north of Munich. The forced-air-cooled motor has a bore and stroke of 28 x 26 mm, equaling 16 cc. The power is not less than 0.25 hp at 6000 rpm. Obviously, this engine was not specially built for these scooters, but primarily for saws, lawn mowers, and the like

The offered scooter has been refurbished with a right hand drive engine complete with an extremely rare recoil pull-starter. The intake manifold has been extended to fit the right hand configuration and the exhaust is an aftermarket muffler. The only other aftermarket parts are the kill switch, shield trim and tire inner tubes which are nonetheless very similar to the originals. The clutch assembly is all new from NOS (“new old stock “) found among Hap Alzina’s leftover stock many years after the closure of his motorcycle business. The seat and right hand grip are also NOS, purchased on EBay.
Dents on the scooter were small in size and few in number and were also considered to be an addition to the 60-plus year-old patina and thus were not removed. The frame, fenders, front and rear shields are all powder-coat paint which matched the original color. The rims and gas tank are enamel spray painted. All chrome is original. The only missing piece is the horn that would mount on the front fender.