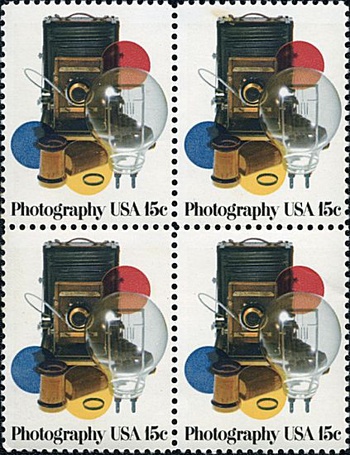 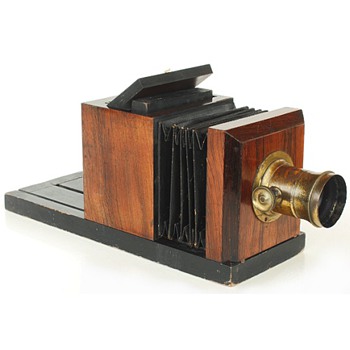 January 7, 2014 is just around the corner. So ... why is this date so special? For camera collectors and historians it marks the 175th anniversary of the announcement of daguerreotype photography in 1839; the first commercially available process to the public. And the world instantly changed!

Whether you know it or not, all picture taking methods up through today’s digital photography are based on a simple concept of creating a permanent image using a lens placed at one end of a dark chamber. Yep, that means every black and white image, those boring Kodachrome vacation slides, Facebook and Instagram pictures and so forth (including movies and selfies) share the same basic DNA as the first photographic discoveries.

Shown here is a block of 15 cent stamps (probably around 1978 or so) issued by the United States Postal Service celebrating photography. Several ‘tools of the trade’ are depicted. Also shown on this post is the oldest camera in my collection; an 1854 Palmer & Longking made exclusively for the daguerreotype process.

I’ve been deeply involved with photography since the 1960s and have handled a lot of imaging technology and cool cameras. I studied with Ansel Adams in one of his famous Yosemite workshops with a large format 4x5 field camera (polaroid backs and sheet film). And then I openly embraced digital photography and love it. Yet I cannot imagine what the next wave of imaging technology will be. But I am definitely looking forward to it!