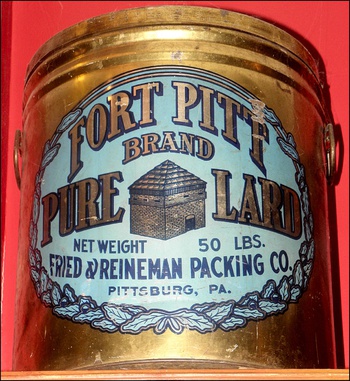 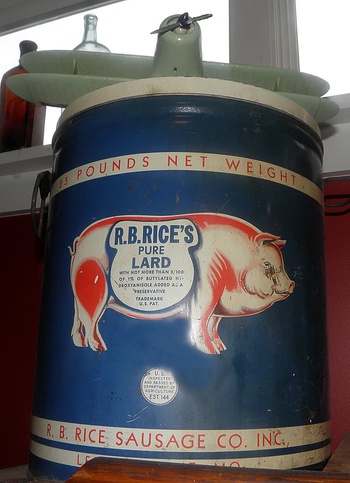 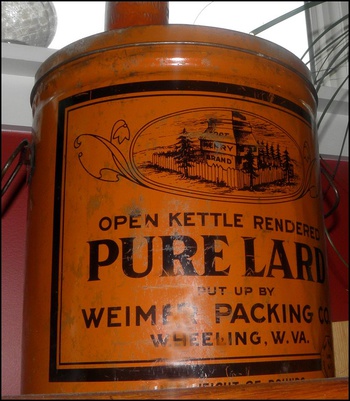 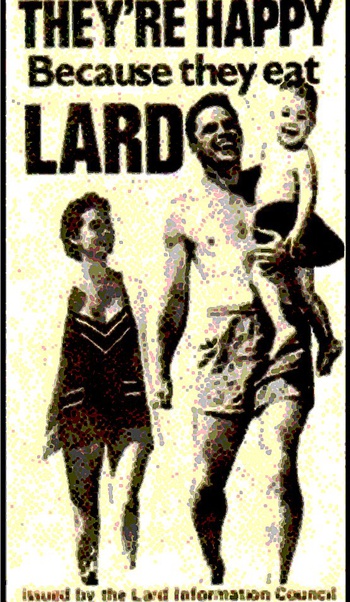 As I have said before, I see two or three of almost anything together and I start collecting it. Here are some of my Lard Tins. These are large ones, 25 or 50 pound ones. I think they date from the 1950’s or 1960’s. All I have, save one, came from local lard producers.

The “Lard Information Council” ad is a spoof - I think. In that vein I impart the following “information”:

• In the 1990s and early 2000s, the unique culinary properties of lard became widely recognized by chefs and bakers, leading to a partial rehabilitation of this fat among "foodies". The editors of Grit Magazine have published 150 time-tested lard recipes your family will love. My mother, now 97 and of English decent, recommends that old English favorite “Lardy Cakes” - for taste and longevity. I’m sorry, that recipe is a family secret; I can’t send it to you.

• I love donuts, especially double-glazed ones. Now all we have to do is get the donut industry to go back to lard! I remember that up until sometime in the 1970's lard was used exclusively in making donuts and the flavor has not been the same since that changed!

• The emotions in the following excerpt remind me of myself when opening a package containing a newly acquired eBay vase :

Good lard starts with good pork fat - and plenty of it. Old recipe books tell you that the fat on a hog's back grows thicker than an inch, but modern pigs are bred to be as slim as greyhounds. The pigs I needed were premodern. At last, I found (on eBay) two young farmers who raise venerable breeds like Tamworths on the rolling pastures of Flying Hogs Farm. These enterprising pig merchants agreed to hook me up (Buy It Now). For five long days, I waited for my fat. On the sixth, a huge cardboard box arrived (USPS Priority Mail, Insured). I tore it open ( it was carefully wrapped) and stared in awe. Inside were four massive hunks, each the size of a dictionary. They were lumpy, with the barely noticeable pink color of a cooked rabbit loin (just as descibed on eBay - 5 Stars). Together, they added up to 10 pounds of the finest pig fat, and it all belonged to ME!

• Here is a blurb that is a lesson to us all in today’s service conscious world:

Before serving the burger he accidentally dropped it on the floor, he picked it up, then thoughtfully dipped the meat in hot lard (to kill any germs and seal in the flavor), slapped it on bread, and handed it to the customer with a flourish and a smile. Now THAT'S good service!

One security conscious citizen felt we here in the USA were fairly well protected against most types of terrorist attack, e.g. dirty bomb – but was VERY concerned that terrorists might dump lard into the water supply. I’m thinking about starting a “neighborhood watch group” to patrol our local reservoir.

At one time, in parts of the world, wealth was measured in tulip bulbs. Other great investments were stocks and bonds, gold & silver, and even fine art. You heard it here first folks, the next great money-making, wealth preserving opportunity – LARD!