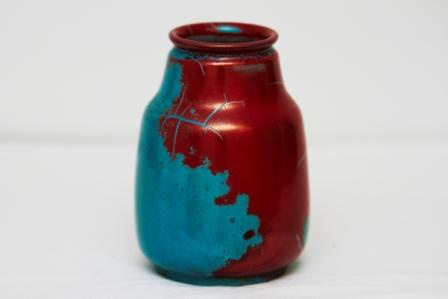 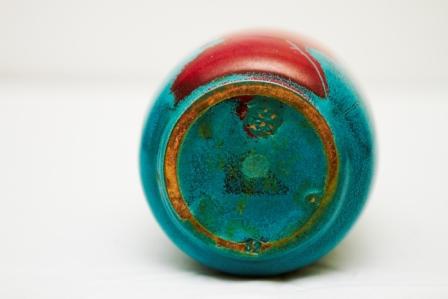 P. Ipsens Enke ('P. Ipsen's widow') vase in coral red and turquoise craquelé glaze, the so-called 'danit glaze', 1933. It was designed by potter Axel Sørensen (1891-1967) who worked for Ipsen 1923-1945. Not much is known about him, except that he was an apprentice at Ipsen and he was an important influence there! In their book about the factory, K. Jørgensen and B. Holst list 348 different items assigned to Axel Sørensen.

When Ipsen celebrated its 90th anniversary in 1933, an exhibition was held at Forum Exhibition Hall in Copenhagen and a new glaze was introduced. In the beginning it was called 'copper glaze', but it got its name 'danit' after a name competition in connection with the exhibition in 1933. The winner, a miss A. Nielsen, won an Ipsen lamp! (Source: K. Jørgensen and B. Holst).

It was also in 1933 Axel Salto granted P. Ipsens Enke permission to produce a selection of his designs. One is a pear-shaped budding style vase first made in 1937. I've come across it a couple of times on auctions - I've seen them with different types of glaze, e.g. celadon.

Over the years, a number of artists worked for Ipsens Enke, the most famous ones of whom were Thorvald Bindesbøll and Christian Joachim (apart from Axel Salto). Ipsen is more well-known for their orange/brown Skønvirke (art nouveau) pottery. I do not particularly like that (with a few exceptions), whereas I find this one a fun example of art deco pottery.

Height 15 cm. Mark unclear in the photo (but undoubtedly Ipsen). Also the number 52 (one of the 348 different works of Axel Sørensen).