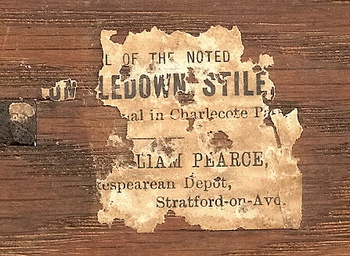 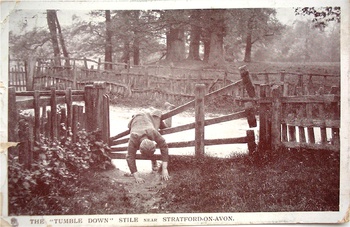 I acquired one of these 3 years ago and had been unable until now to reveal any information about the stile. I thought it may be a patent model since it fits within the US Patent Office requirements for a model. A recent purchase of a second one revealed a partial label on the bottom that reads as follows (my interpretation):
Model of the noted Tumbledown Stile, Original in Charlecote
Park, (Sir) William Pearce, Shakespearean Depot, Stratford-0n-Avon.

I am convinced it is a souvenir sold at the Shakespearean Depot during the 1914 Summer Exhibition.

The postcard on the right from the early 1900s is titled "Tumble Down Stile, near Stratford-on-Avon." The description on the back says:
"This quaint and deceptive gateway is situated in a field in Charlecote, close to Stratford-on-Avon. To all appearances of firm construction, it is built so the unwary pedestrian who attempts to cross without knowing its' peculiarities is precipitated headlong to the ground."

The original tumbledown stile was restored in 1986 by the Kenilworth History & Archeological Society. This site is reputedly where Shakespeare was caught poaching the deer of Charlecote Park.