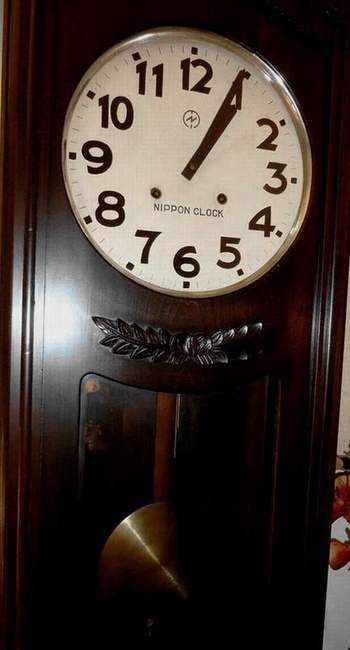 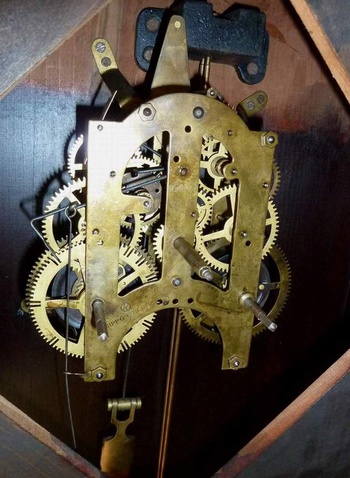 This is an interesting, very large wall clock that I found on Craigslist, Emeryville CA in October of 2011. A Japanese spring driven regulator with an incredible melodious 'bim bam' strike. The case is 50" in height x 17" across the top , 16" mid width x 6 1/2" depth. No question that it is post WWII. I can only guestimate that it was produced in the late 40's to early 1950's. The husband and wife that I purchased this clock from told me that they were in Okinawa in 1961. As they were exploring about, they spotted this clock in an old and what appeared to be an abandoned movie theatre lobby. They made inquiry of the local shopkeepers to find the owner to ask whether they could purchase the clock, and ultimately they did for $10 U.S. dollars. The clock then went with them and 'lived' in Italy for a number of years, then on to Australia for several more years. After their return to the U.S., many of their wonderful furnishings including this clock went into storage in the early 1980.'s. What you see in the first picture is what I hauled away in my Nissan van. The bottom portion of the dial is imprinted with: Nippon Clock Co. LTD, Seki City Gifu Prefecture Japan. The movement is also marked Nippon with the insignia. I can find NO information on the Nippon Clock Co. in Seki City. Of course the company doesn't exist anymore, but I was hoping to find a few more details. I paid Joe his asking price of $50.00 and proceeded home to restore the case. The door glass is unusually thick and has a very narrow bevel. Although I am familiar with most wood species, this rather dense hardwood has me baffled. I am not particularly fond of or interested in Japanese clocks for the most part, but this one was a fun project and has a special place here. I'll set my watch by this clock.