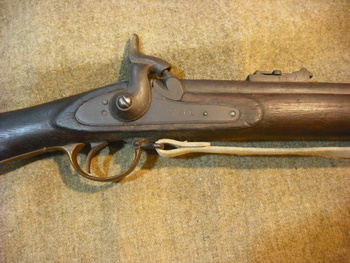 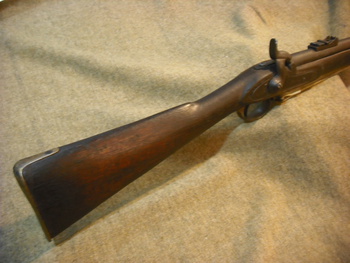 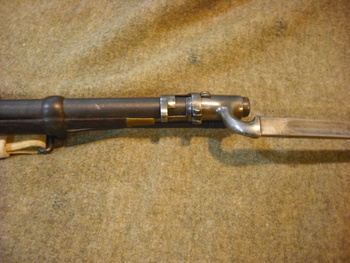 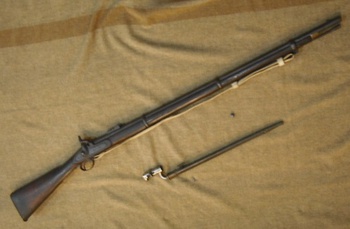 The 1853 Rifle Musket was used extensively by the end of the Crimean War, as well as being imported to the US during the American Civil War. “Rifle Musket” sounds a bit redundant to us, but it was intended to indicate the rifle was the same length as the musket it replaced.

The 1853 Enfield was issued to Indian troops starting in 1856. Afterward, the story goes that rumors began to spread that the paper cartridges for the Enfield were greased with pork and/or beef – a violation of both Muslim and Hindu practices, as the cartridge was to be torn open with the soldier’s teeth before pouring the powder down the barrel and ramming home the bullet. This supposedly contributed to the Indian Mutiny of 1857. How true that is, I am not certain, but it makes an interesting story.

My 1853 Enfield has what I believe is Hindi script on the lock where we would normally find the British crown. My understanding is that this pattern rifle continued to be made in India after it was obsolete in Britain in part because after the Indian Mutiny, the British Empire was less inclined to give Indian troops technological parity with British troops. I can’t recall where I read that, but it would make sense. Based on the fact that this weapon, like the last one I posted, is documented to have come from a huge cache of antique arms that were stored away in a palace armory in Kathmandu Nepal makes me confident that this is a period piece and not a recent reproduction sold in the bazaars to tourists.

Like the British Enfield, it is .577 caliber and weighs about 9 ½ pounds (4.3 kg) and about 55 inches (140 cm) long. It’s rear sight is graduated in what I believe is also Hindi Script, but looks to be the same as the British sights which were graduated from 100 to 400 yards. It could also be flipped up to go out to a maximum of 1,250 yards, although I think that would be pretty optimistic. Like the original British pattern, the barrel is held on by three bands, and the pattern is sometimes referred to as the “three band Enfield”

I managed to find a correct pattern 1853 bayonet, also with Hindi script, and War Department marked scabbard, which I’ll detail in my next post. More scarce is the vintage white buff leather sling, which is correct for the period and the rifle. I purchased it at another auction years later. It's pretty delicate and is on the musket for display only.

Now, the fun part for Blunder and any other black powder enthusiasts: I took this to the range and set up a standard 100 yard target at 50 yards. Firing a .570”, 276 grain patched ball with 60 grains of Goex FFg, I fired three rounds and never hit paper. I upped the powder to 70 grains, and still nothing. At 80 grains I scored four out of four hits – one in the 7 ring, two in the 5 ring, and one just outside the 5 ring. At that point the detonations were throwing back the hammer, and on the last shot the lock froze up with the hammer all the way back – so after managing to free the hammer, I retired this old piece for good.