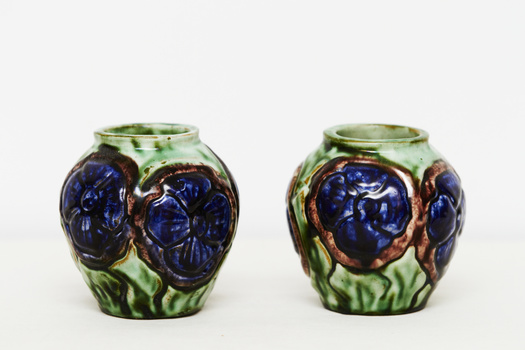 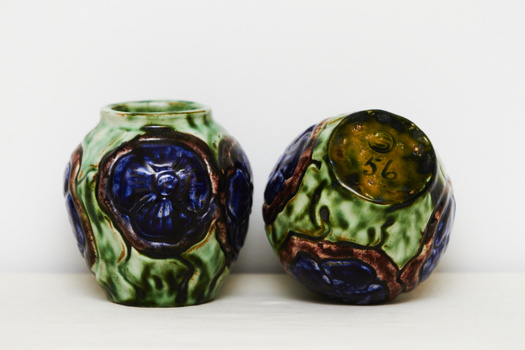 These small (8.5 cm) and colorful vases come from Roskilde Lervarefabrik ('Roskilde Pottery Factory') about 30 kms from Copenhagen. The factory was founded in 1847 by Frederik Brack and produced pottery for daily use, such as planters, jugs, and jam pots. In 1915 it was decided to start a line of 'art pottery', and these two vases are very typical examples of the new type of pottery. The factory was destroyed by a fire in 1921 and a new one was built and opened in nearby Taastrup in 1924 under the name Brack & Sønner ('Brack and Sons'), know for their yellowish brown pottery often marked with 'B&S'. Usually, the Roskilde pottery is marked only with a number, but the style is very characteristic, so usually it is not difficult to identify. In this case, however, the vases are marked with 'CS' in a circle. The CS stands for 'Carl Stender', a local art dealer who had the exclusive right to sell certain 'first-class ceramic works'. The contract was made in 1917, so that's why these vases must have been made between 1917 and 1921... These were given to me by a guy whom I help out once in a while unpacking all his stuff on markets - he knows I love pottery from this period!