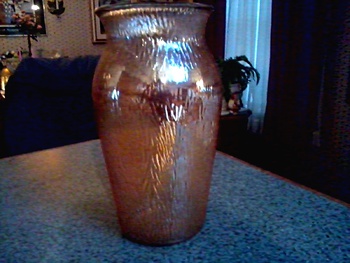 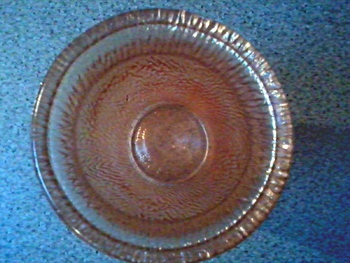 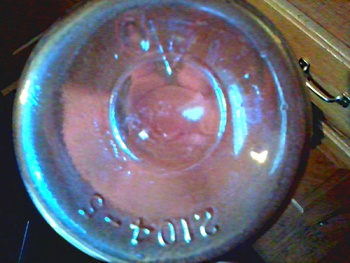 This nice 7 1/2 " vase came from the Cleveland GW. It's from the long gone "Jeannette Glass Company" in Jeanette, Pennsylvania. It's was part of their Carnival glass line. The color is "marigold" and the pattern is called "Tree Bark" The bottom has their mark, a Triangle with a "J" in the middle. A bit hard to see, but it's there. Also the pattern numbers "2104-5". It dates from around the 1950's 60's. -Mike-

The Jeannette Glass Company was founded in Jeannette, Pennsylvania in 1887. The founding of Jeannette Glass came in 1887 when the Western Land and Improvement Company’s application for a charter from the state of Pennsylvania was approved. The company directors were James A. Chambers, H. Sellers McKee, J. Gardner Cassatt, Horace Magee and B. Maurice Gaskill. The town the plant would be developed next to was named after McKee’s wife. The Jeannette Bottle Works Company was founded in the next year in Jeannette. In 1924, hand-pressed tableware was introduced into the product lineup, and it was not soon after that prism glass was dropped from the product lineup. The Depression-era Glass, as it was to be called, included the Adam, Anniversary, Cherry Blossom and Pansy pattern lines, and pastel colors such as pink and green. In 1981, Connecticut businessman John P. Brogan leveraged a buyout financed by Security Pacific Business Credit. Due to Brogan’s lack of knowledge in the glass industry, Jeannette was forced into Chapter 11 bankruptcy in 1982 and closed in the following year in 1983. At its height, Jeannette employed over 1,500. The property has steadily deteriorated since then, and is heavily contaminated.