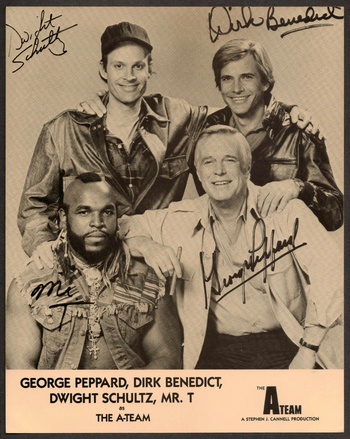 This is an 8" X 10" publicity photograph for "The A-Team", an American action-adventure television series airing from 1983 to 1987, about a fictional group of ex-United States Army Special Forces personnel who work as soldiers of fortune while on the run from the Army after being branded as war criminals for a "crime they didn't commit". The show featured George Peppard, Dirk Benedict, Dwight Schultz, and Mr T. and is autographed by all four stars. The show was produced by Stephen J. Cannell.