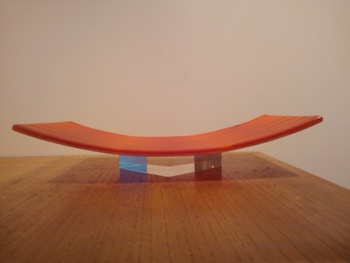 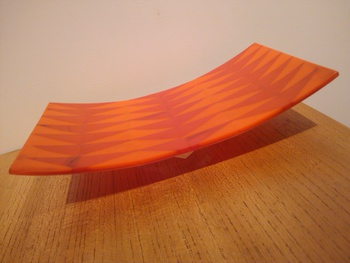 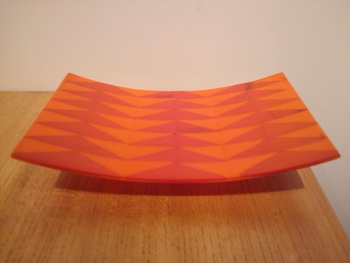 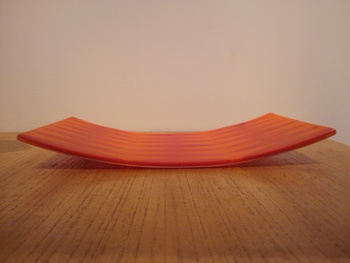 There might be a few other posts today from us Down Under.
Beware!

So each year Paul and I like to go down to Melbourne!
Paul was born there and I just love the place.
Elegant.

Different to life in brash Sydney.

In 2002 Federation Square opened in Melbourne and with it soon came Kirra Galleries on the The Atrium. Great Australian glass! I was enchanted.

Paul went down to Melbourne on Bank business and came back with a present for me. It was this piece of glass by Lisa Cahill. It's signed and dated 2002. Thanks to PAC for his great taste and choice of this piece!

Bullseye glass has changed glass manufacture in this country and all over the world. Their palette is extraordinary!

Australian glass artists choose colours that have meaning to them and play with the medium. In this case Lisa Cahill has created a slab that is a carpet in flight. She has chosen the colours of the Australian desert.

Born in Victoria, in 1974, Lisa Cahill was described in 2002 as "a key emerging practitioner in the Australian artglass industry." She has a Master of Fine Art from Monash University and a Bachelor of Arts, Ceramic Design.

In 2002 she founded Studio 252 a mixed media studio which also included her own Kiln-forming Glass Studio in Richmond, Melbourne, Victoria. The year before she had been Artist In Residence at the Bullseye Glass Company, Portland, Oregon, USA.

These days "Lisa Cahill is an Australian artist, known internationally for her kilnformed and coldworked glass wall works which include several public art commissions. Since completing a BA (Hons) Degree in Melbourne, Australia in 2000 she has worked as an independent studio artist for over 10 years having established her own kiln-forming and cold-working studios in Melbourne and Sydney and now Canberra. She has been a Board Member and Newsletter Editor of Ausglass (the Australian Glass Artist’s Society) since 2009, and Vice President in 2010. Cahill has been awarded numerous grants and prizes including Australia Council for the Arts New Work Grants in 2002, 2007 and 2010 and has been a regular finalist in the Ranamok and Tom Malone Glass Prizes. She teaches and lectures internationally and has had residencies at the Bullseye Glass Company in 2001, Northlands Creative Glass in 2008 and the Canberra Glassworks in 2012 and 2013. Cahill's Public Art and Architectural Commissions can be seen in Sydney and Melbourne, Australia and her work can be found in public collections such at the National Art Glass Collection, Wagga Wagga Regional Art Gallery, NSW, Australia, the Ebeltoft Glass Museum, Denmark and in the Northlands Creative Glass Collection, Lybster, Scotland."