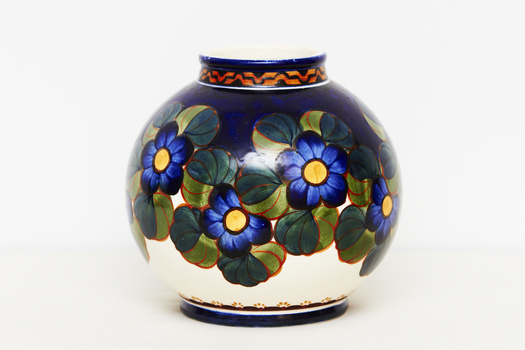 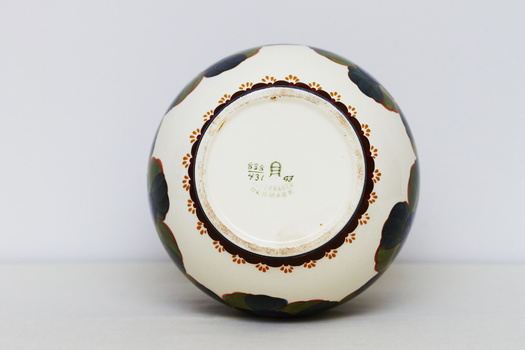 Round faience vase with (I think!) lovely colours manufactured at Aluminia. The history of Aluminia is intertwined with that of Royal Copenhagen. It was founded in 1853 and bought Royal Copenhagen in 1882, but was then in turn incorporated into Royal Copenhagen in 1969. In the early 20th century the factory produced a large number of faience vases, dishes, jardinieres etc. with this kind of decoration which is typical of the Danish interpretation of art nouveau. The shape itself (from 1905) is the work of Harald Slott-Møller (1864-1937) who was the artistic director at Aluminia 1902-1906, although he is much better known here as a Symbolist painter.

The vase is adorned with decoration termed 'Heibergs blaa Blomster' ('Heiberg's blue flowers') from 1912. It is named after painter Johanne Heiberg who designed a number of flower decorations in the period 1905-1919, one of them being this particular decoration. You see a lot of these early Aluminia pieces around on markets - some of them are quite pricey. I bought this on a flea market - it has a small chip at the rim, so I could have it at a very reasonable price...