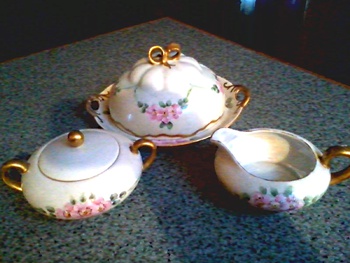 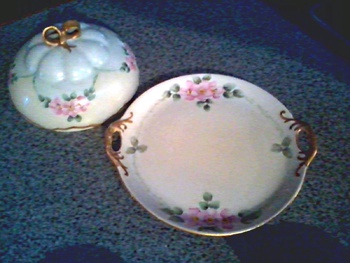 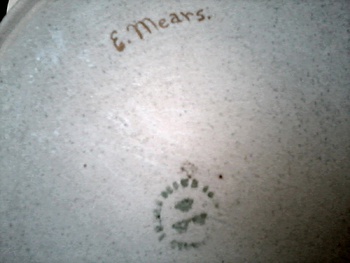 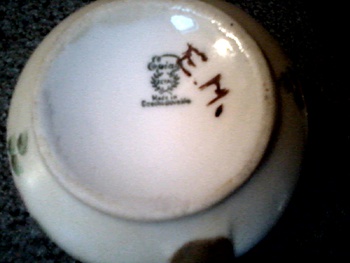 This is a really nice little set of amateur hand painted pieces. Probably done around the 1900 to 1920's by E. Mears. They would have been purchased as blanks from various porcelain importers at the time. The covered dish is German imported by "Three Crowns" who are not the maker which is unknown. The dome is a really nice shade of robin's egg blue with a little gilt bow on top. The sugar bowl and creamer were probably bought at a later date and painted to match. Both are from the Czech company "Epiag" who are still in business today. The creamer has a luster interior since it is seen, while the sugar bowl does not. Really nice condition with minimal wear to the gold accents -Mike-

History of Epiag Porcelain
http://www.epiag.cz/
Northwestern Bohemia, specially district Karlovy Vary, have been predetermined for porcelain industry, because of their rich deposits of kaolin.
That is why was in year 1804 established porcelain factory in Dalovice. Its owner Johan Ritter von Schönau began to produce stoneware on his manor. From 1850 until beginning of the century had porcelain factory in Dalovice several owners, but only in 1889 when it owned the company Springer from Loket, was finally abolished production of stoneware.
In 1918 the factory became part of concern Epiag ( Erste Bohmische Porzellanindustrie A. G. In Karlsbad (The first joint-stock company Czech porcelain industry in Karlovy Vary.)
Factory equipment was at the high level and its products have reached the highest quality.