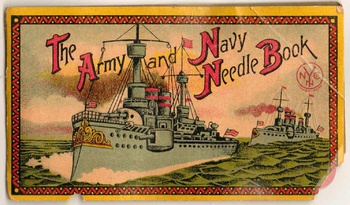 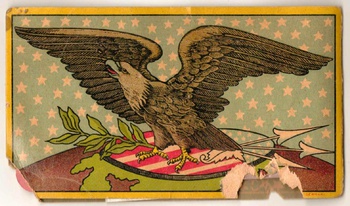 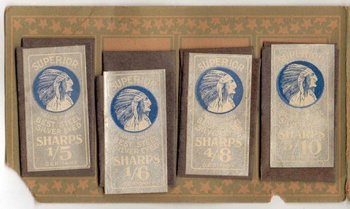 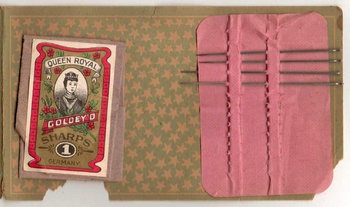 This is mid-late 1940's post-war Army and Navy Needlebook. - There are more than 20 different kinds of Army & Navy Needle Books with different variations. For example the classical "Iowa" single ship was exported from Germany, Czechoslovakia, Japan, and was sometimes just marked "Foreign". The single ship kind comes named as Maryland, Massachusettes, No Name, etc. in addition to Iowa. These needle books often vary in color and have different illustrations on the backs. These needle books were never sent to soldiers. They were marketed to the home crowd, and never during a war, but afterwards. They were usually produced by our former enemies.
This one has a cover picture of two un-named U.S. warships and is noted as NYC and Made in Germany. It contains small packages of "Superior" sharps in four sizes, 1/5, 1/6, 4/8, and 5/10, and also a package of "Queen Royal" Goldey'd sharps #1 in addition to a few needles left in the pink holder. The packaging is slightly damaged. 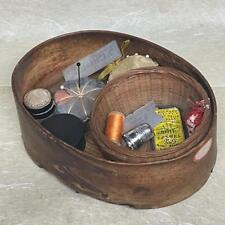 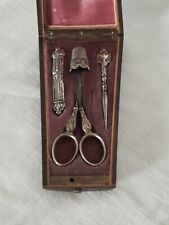 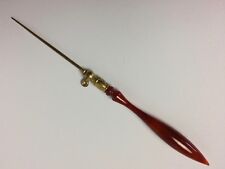 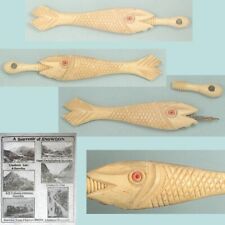