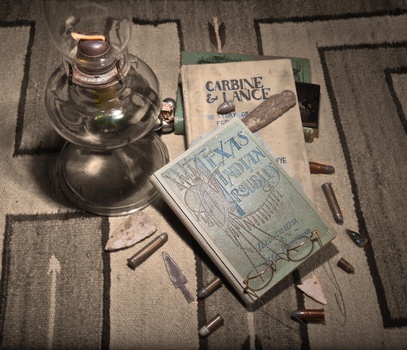 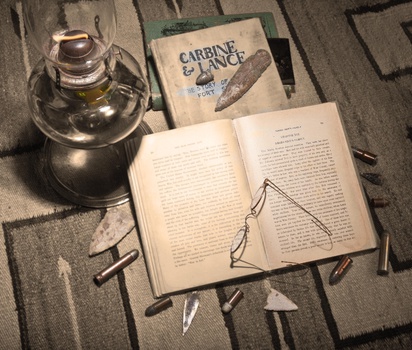 Texas Indian Troubles Illustrated by Hilory .G. Bedford of Benjamin, Texas. Printed in 1905 by the Hargreaves Printing co. Inc, Dallas, Texas. This first edition was once the property of Mr. John Westley Adam of Decatur, Texas and noted 1870's Texas Ranger. It was passed down to his daughter after the passing of both Mr and Mrs. Adams. This book has been professionally rebound using the original front cover of the book. The book itself is completely in tact containing all pages. This book has several hand written notes inside it on different pages which describe both people and places known to the Adams family. Mr. H.G. Bedford is noted as a family friend as well as others. The book contains 43 chapters by 43 different people whom have related their personal conflicts with Indians in the state of Texas. I have read this book several times and in reading this book I am compelled to reread chapter 19. Entitled "Negro Brit's Family" starting on page 99 and ending on 102, I have found this chapter, one the most compelling love stories hidden inside a booked filled with violence, hate, ignorance, bigotry and loss. This chapter was not written by Mr Brit, whom I latter identified as Brit Johnson but friends who were dismayed that his story was not both widely known but felt that a monument should have been built on the spot where this "Man" fell. Please note that Mr. Britt Johnson had display such a great devotion and love for his family that one can only view him in awe. This book has been reprinted and is currently available for anyone who would like to read it. First editions are quite expensive and a bit hard to find, this first edition combined with the personal notes makes it the star of my western book collection. In photographing this book I looked for a way to show and express what I felt the book contained and I used a copy of my book Carbine & Lance by Colonel W.S. Nye to support Texas Indian Troubles as well as point out that while reading it I found a report of the killing of Brit Johnson made by an Indian who took part in the fight. If you find yourself reading either books you will find these stories compelling.