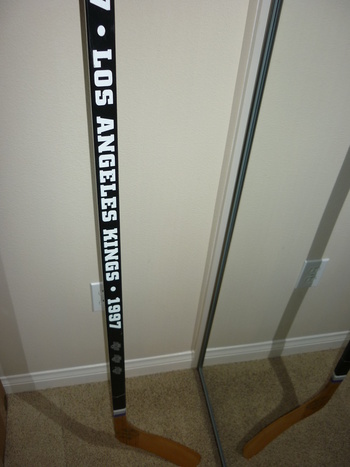 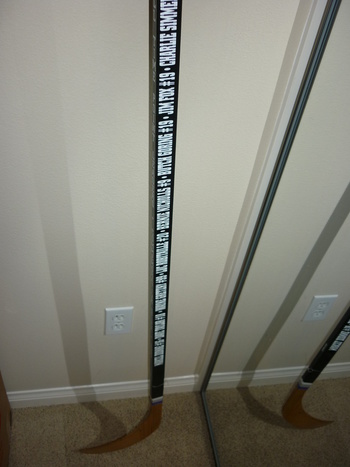 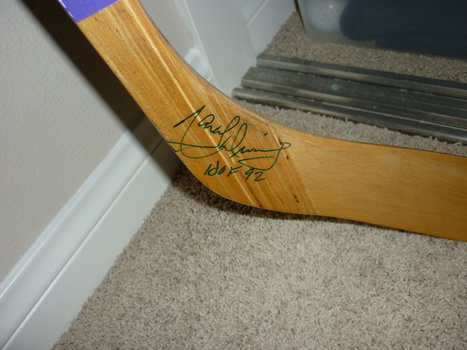 I received this stick as a promotion from the team for season ticket holders back in 1996-1997 for the Los Angeles Kings' 30th anniversary season. I estimate there are a few thousand of these out there still in good condition, but you don't see many of them around.

Some came autographed in black sharpie (if you bought full season tickets), I only had tickets to around half a season, so mine came unautographed. But I ran into Marcel Dionne at an unscheduled appearance the same week and had him sign mine in blue sharpie, which he wrote dutifully. The inscription reads "HOF '92" underneath his name.

One side of the stick says the name of the team with the years listed. The top edge of the stick reads vertically, "Top 10 All Time Point Leaders - Commemorative Stick". The other side lists the players in order, starting with Dionne, and their jersey numbers. #16 Dionne, #18 Dave Taylor, #99 Gretzky, #20 Robitaille... etc

Not on this list was then-captain Rob Blake because he hadn't cracked the top 10 in team scoring yet, but he finished something like 4th or 5th all-time.